Obstinate Children and the Application of Speed. I Could Write a Thesis.

Having a body clock set to the crack of dawn can be a wonderful thing, especially as the weather turns and Cape Town’s mornings have a warm clarity about them. Jumping out of bed with a wicked enthusiasm to hit the mountains reminds me of what it was like going skiing. Only I get to put on far less clothing and needing the loo just before you leave the house is fraught with considerably less aerobics. Regardless of what time I wake up however, getting Shaun and Lola ready to leave the house is like trying to wake a bear from hibernation. There is much grogginess, grumpiness, and a general disillusionment about the morning. Dangling the carrot of a hike up the mountain, finally gets them to the kitchen, and after Lincoln and I have run several laps around the dining room and sung karaoke to countless songs while Lola and Shaun finish breakfast, we all scramble into the car to hit the only mountain in sight with no clouds on the top. In Cape Town, a warm clarity in the morning means nothing for the rest of the day; the weather here can turn like a cornered celebrity.

So with very few options, off to Constantia Neck we head. Being a public holiday, coupled with our poor forward planning and all of Cape Town’s active population having the same idea, we were stuck in hiker’s rush hour.

Never start hiking at 9am!

We had a lunch date at 12 so this set the tone for the hike upfront. The name of the game was speed. I’m quite sure I repeated this several times just to make sure everyone had got it.

No one got it. I would be lying if I said the kids hit the mountain with any speed what so ever. There was a lot of feet dragging, moaning about the fact that the path went up, eye rolling, staged protests, and several stops in the first 10 meters to sit on rocks. Oh yes, our children too, are human. We certainly can’t win them all. With a little whip cracking and threats of being left at home the next time, they did manage to up their game somewhat. There was more backpacking than usual, more whining, and more disenchantment, until we found our first snake that is. Noisy, black and a tail that seemed to go on forever, Lola was jolted into the morning with rapture! It (the snake and Lola’s rapture) made its departure rather hastily as we climbed the less travelled path to the top of Table Mountain. Lincoln and Shaun had opted to walk on the dirt road with the rest of the pilgrims, so Lola and I enjoyed that viewing alone. As we neared the meeting point of the two paths, we casually walked past another snake, this time a Boomslang. This too was rather noisy, and alerted us to its presence. Only after calling Lincoln and Shaun did the beautiful yellow and black snake slither its way onto the top of a bush and watch us for what felt like ages. I may casually mention it’s a boomslang now, but had we known that at the time I don’t think we would have stood by so casually. At the time we were intrigued that it showed such an interest in us, seemed completely at ease, and made its nonchalant way right in front of us along the path, instead of heading back into the bushes. It was an incredible sighting and reminded us how careful we should be when strolling along our mountain paths, particularly at this time of year. When you’ve done something enough times you tend to adopt a rather blasé attitude towards it. Mindful caution is never a bad thing. 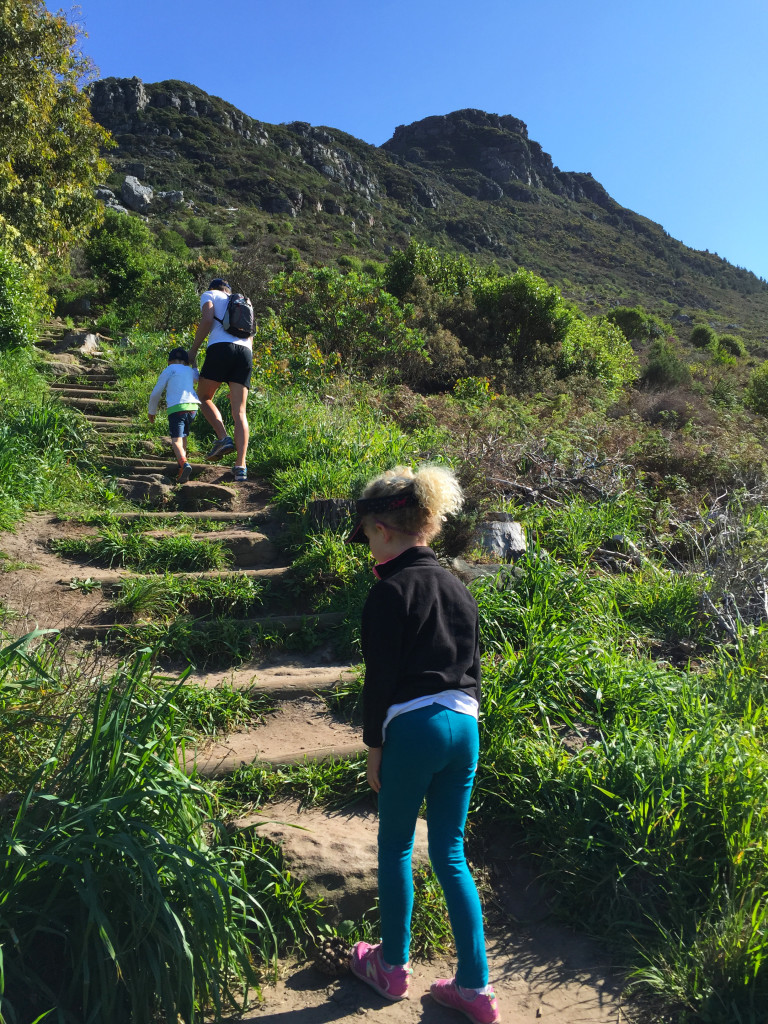 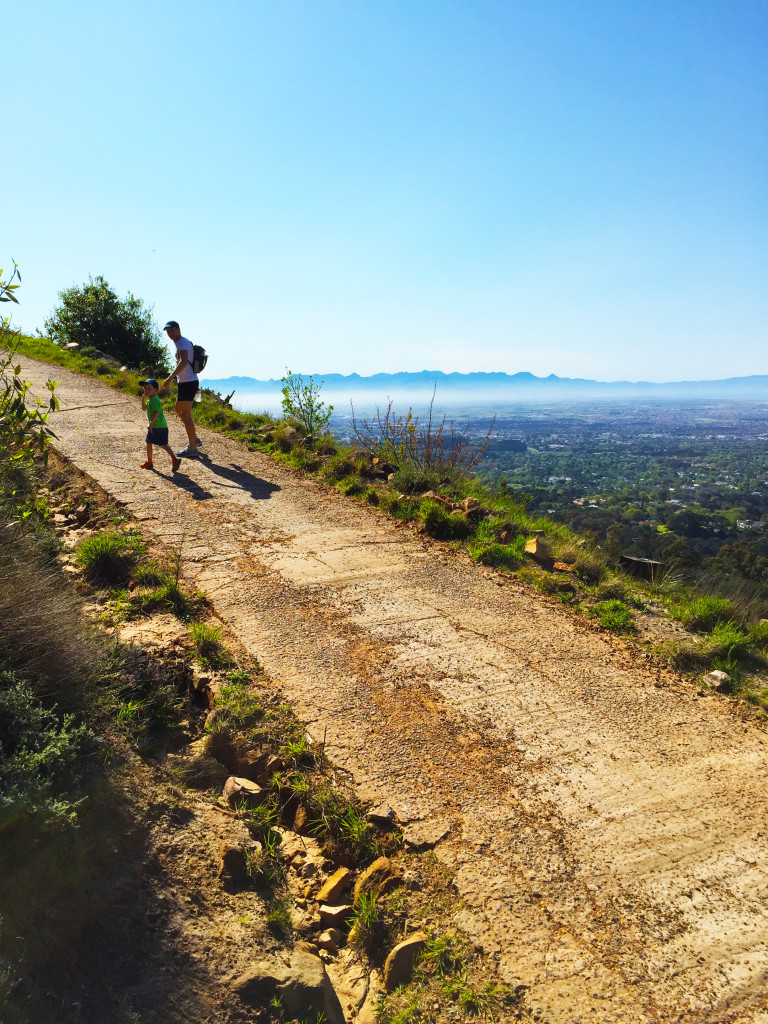 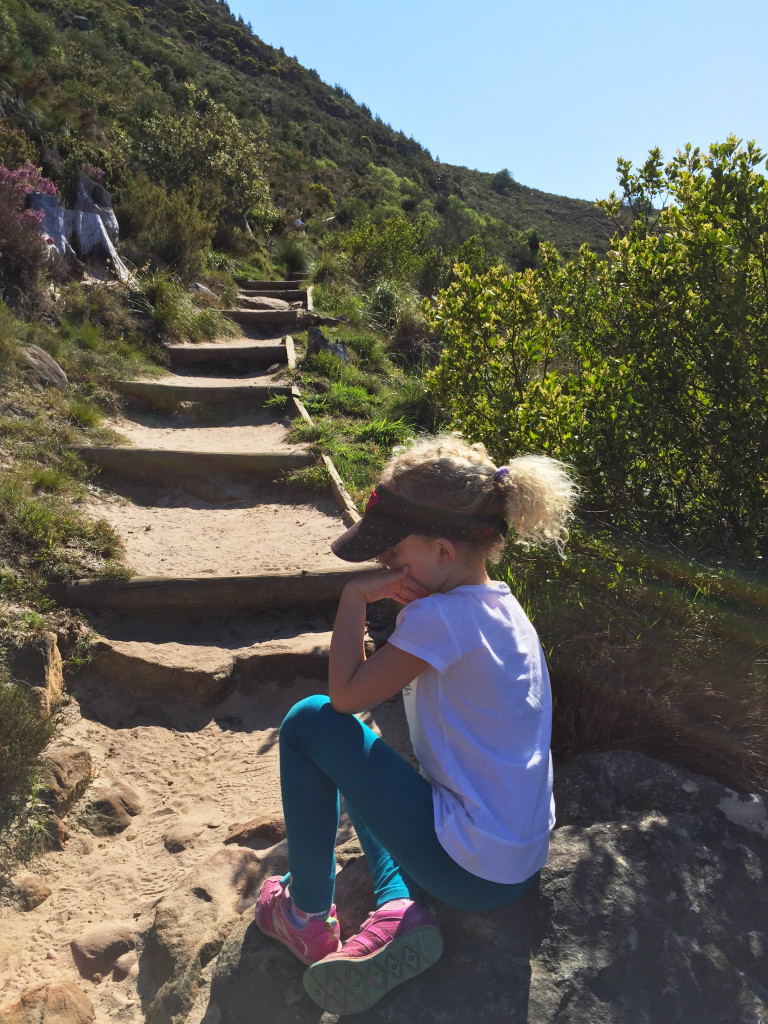 The name of the kids game not having been speed, meant that we had to up the pace on the way down. In an attempt to get the children fired up, Shaun and I implemented sprint training into the hike. One of us would walk with the kids while the other ran down the mountain about 50 meters and then turned and sprinted back up to the others. We took turns doing this until we were exhausted and the effort was completely lost on the kids, whose comments were more concerned with making sure Shaun and I ran the same distance and sprinted as fast as each other all the way back. Lincoln, never liking to be excluded from a race, did finally join in. At no point however, did Lola bow down. Peer pressure is completely lost on that one (I’ll thank my lucky stars in 10 years time!).

I certainly won’t chalk this hike down as a win, the kids obviously didn’t feel it, despite the wildlife viewing successes. Sometimes though, Shaun and I just need to feel the mountain under our feet and get some distance between us, and the rest of civilisation. On that score a hike is always a win, regardless of how the children fair. Even a bad hike gives perspective, and sometimes that’s all we’re looking for. 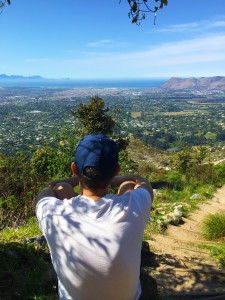 Would I do this again?  Yes. We have actually done this hike many times, but so has half of Germany. It is a great walk, offers options for different fitness levels and has incredible views over the Constantia wine-lands and False Bay. It is popular though, so if you are looking to get some space, this isn’t the walk for you.

What to be aware of?  There are quite a lot of dogs on this walk; most are not on a leash. Be mindful if your kids are dog phobic.
Due to the efforts to restore the natural Cape Town flora, almost all of the tall alien trees have been cut down. This leaves a very sunny hike with little-to-no shelter. Go prepared: take water, hats and sunblock. We walked past more than a few overcooked tourists.