Namibia – In My Wildest Dreams

By Mary August 18, 2018 Hikes, Our Travels, Parks, Uncategorized No Comments
1 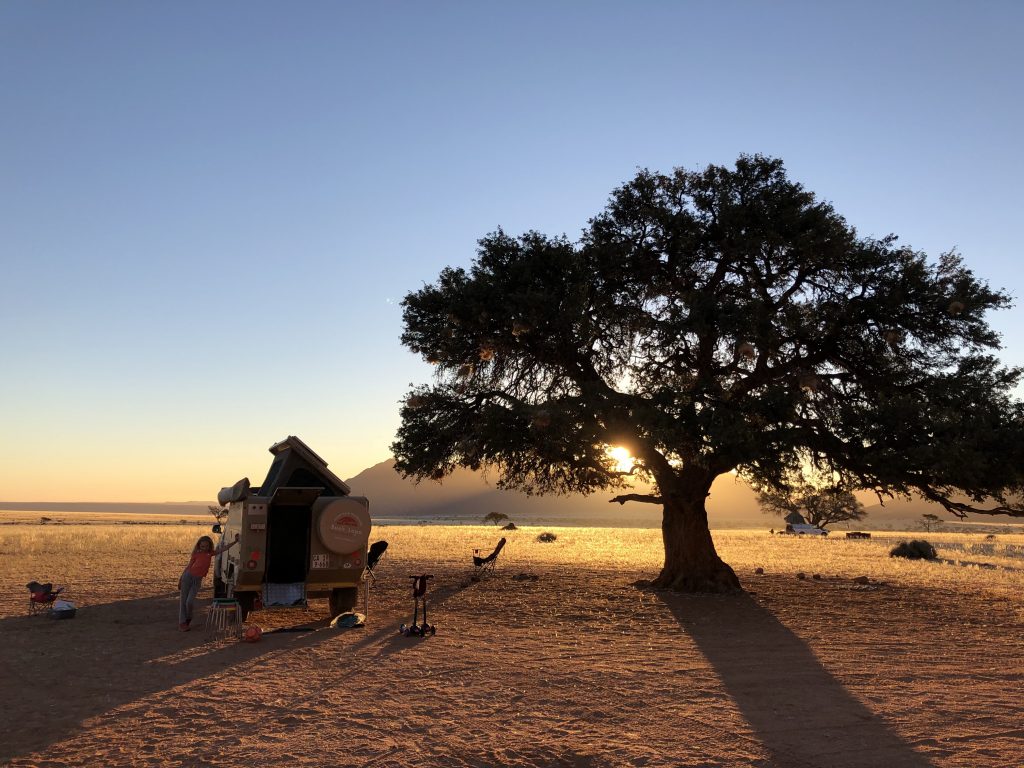 I write this from my camping chair, overlooking the Namtib biosphere. I have rocky mountains behind me, a savannah grassland in front of me, and red dunes peeking out in the distance. Namibia is an incredible place! But before I expound on our time here, let me give you a quick catch up on our remaining time in the Kgalagadi Transfrontier Park.

After I last wrote, we braved the corrugated roads of the park and drove north, into the heart of the Kgalagadi. The camping was luxury! We had our own bathroom where I could even leave my toothbrush for 3 days!.. our own washing up area.. and at my final count about 5 black back jackals that hung out at our camp after dark. Terrifying, but a great African experience. Very coincidentally we bumped into some old friends on holiday from Johannesburg, and we really enjoyed seeing some familiar faces. I think I’m becoming one of those annoying people who try and strike up conversation with anyone, so it was great to find people who actually wanted to speak to me. Lola and Lincoln loved hanging out with their kids and thought themselves rather brave adventurers exploring the camp for a couple of days together. They spent hours covering themselves in all available dirt, and had to be reeled in after dark as they didn’t see these jackals as much of a threat. Yikes!

We had some incredible encounters, including a herd of about 12 giraffe grazing on the side of the road, and finding a pride of lion at a watering hole. If you haven’t seen a lion up close let me lay it out for you; they are huge! They hung out around our car for a while and were almost head height at our Prado window (it is not a low car!). Staring out into the face of a lion had my survival instincts kicking in full swing. I can’t understand why that makes hands sweat and voices go squeaky, but there I was, squeak-yelling at the kids to close their windows as a lion sauntered up to Lincoln’s door, while my sweaty hands manhandled the camera in all the excitement. The lense-cap from our camera is still MIA from all the commotion! 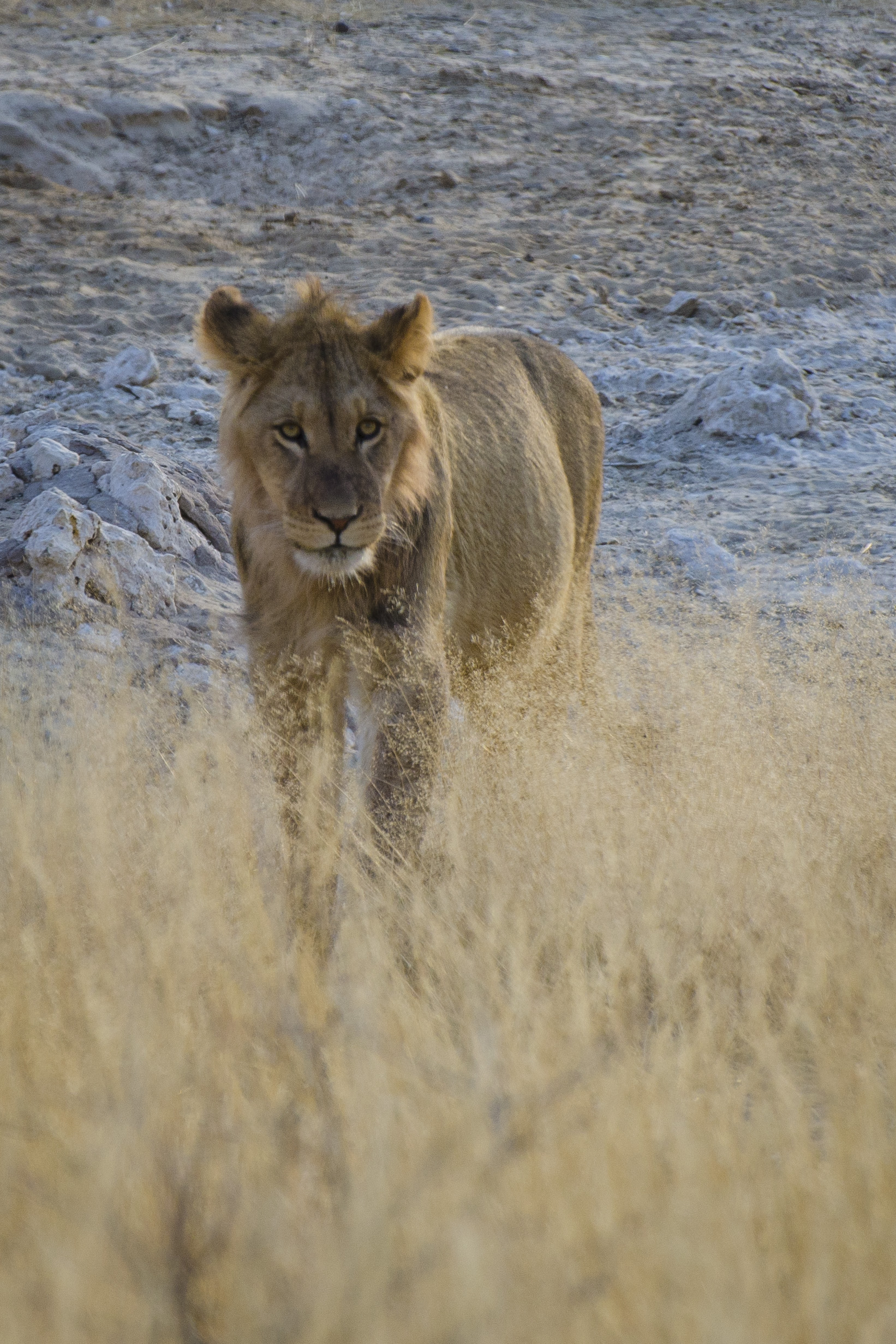 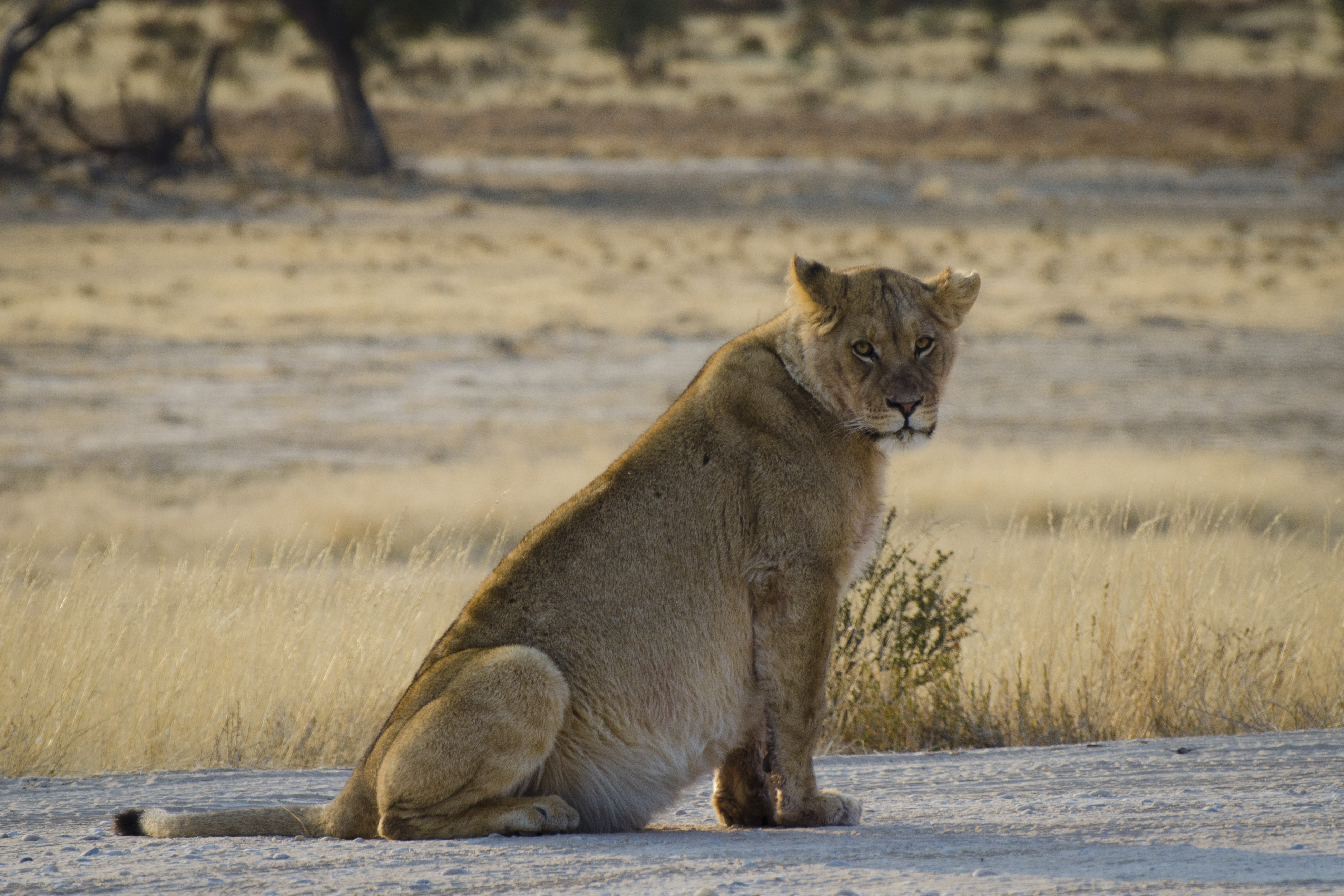 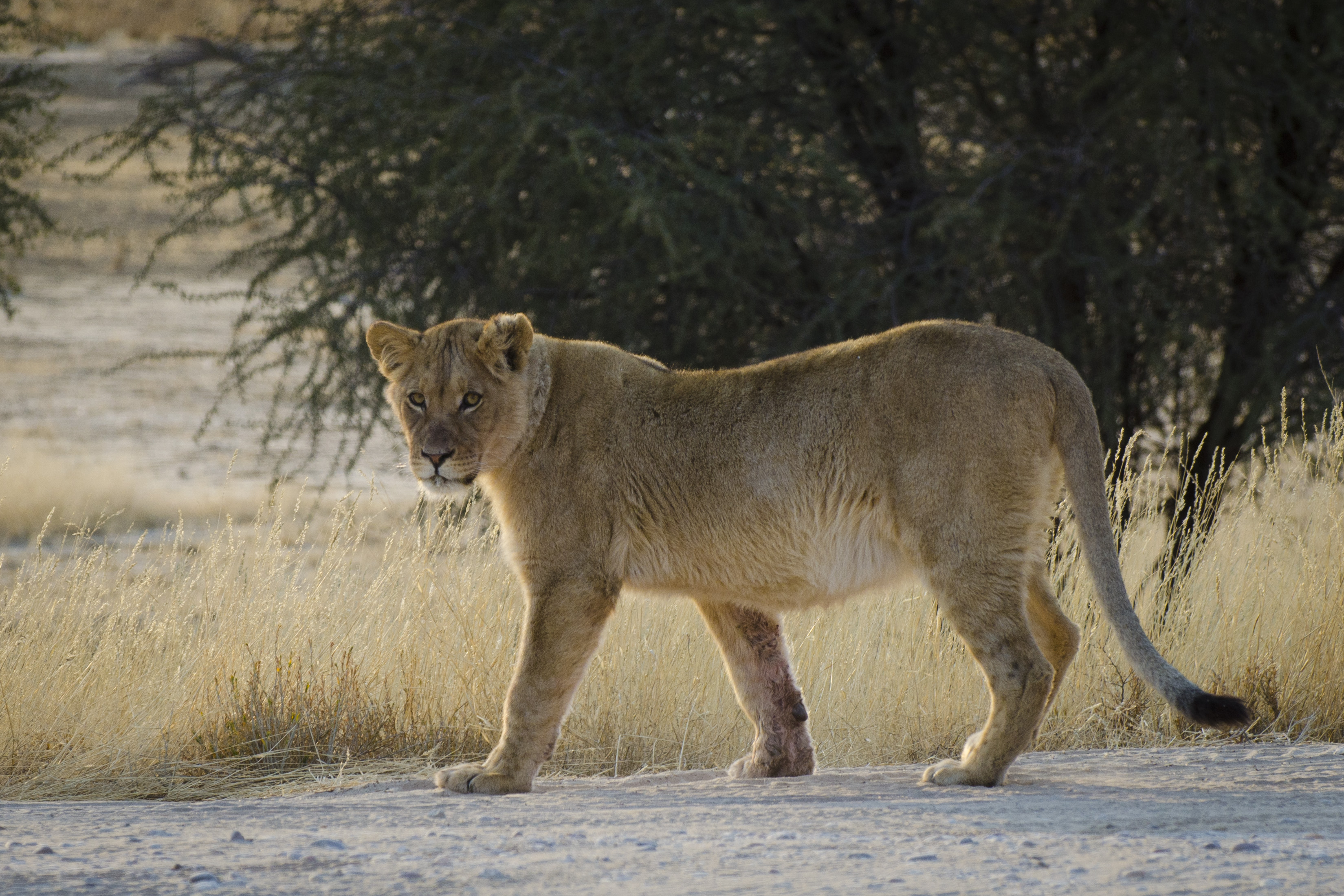 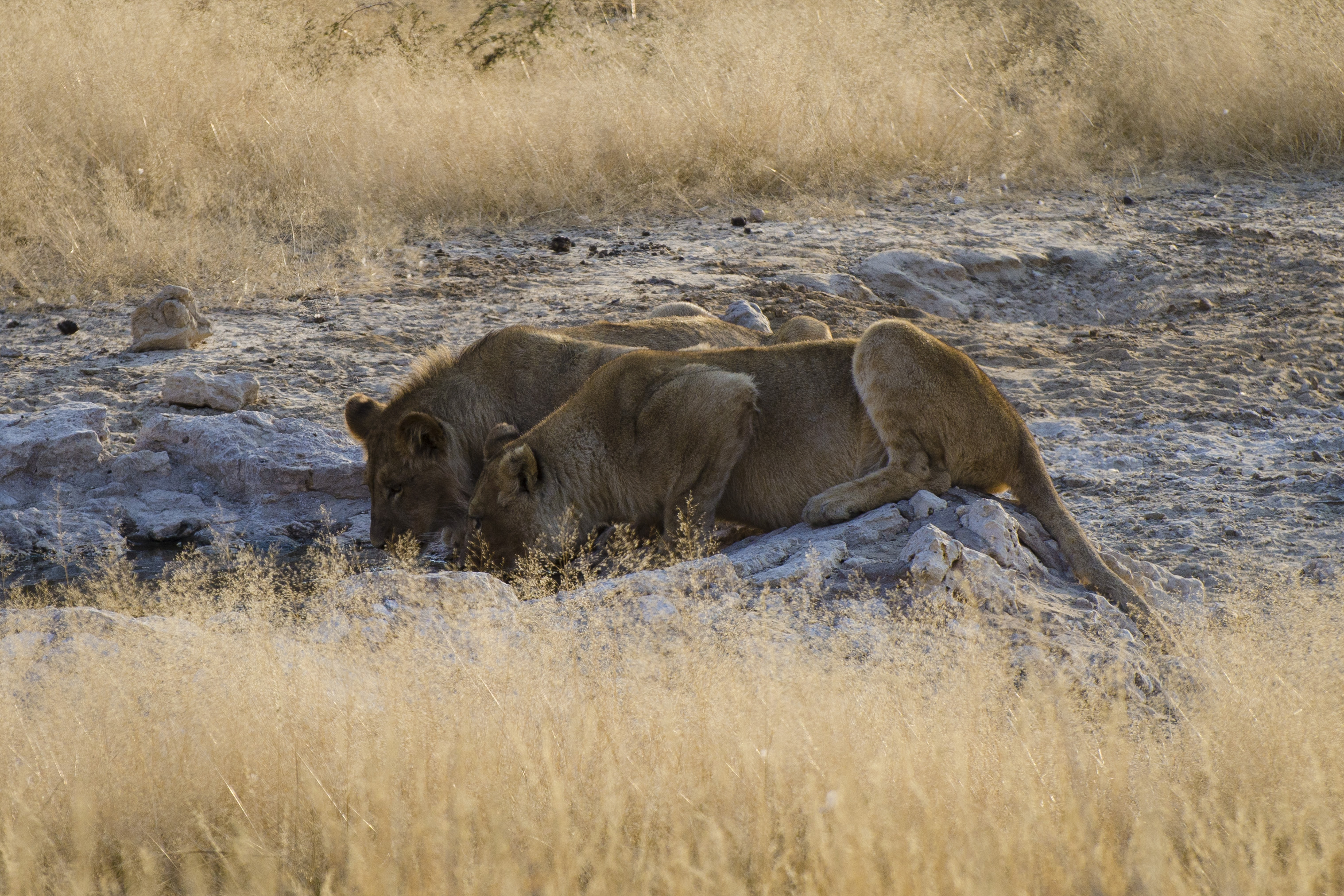 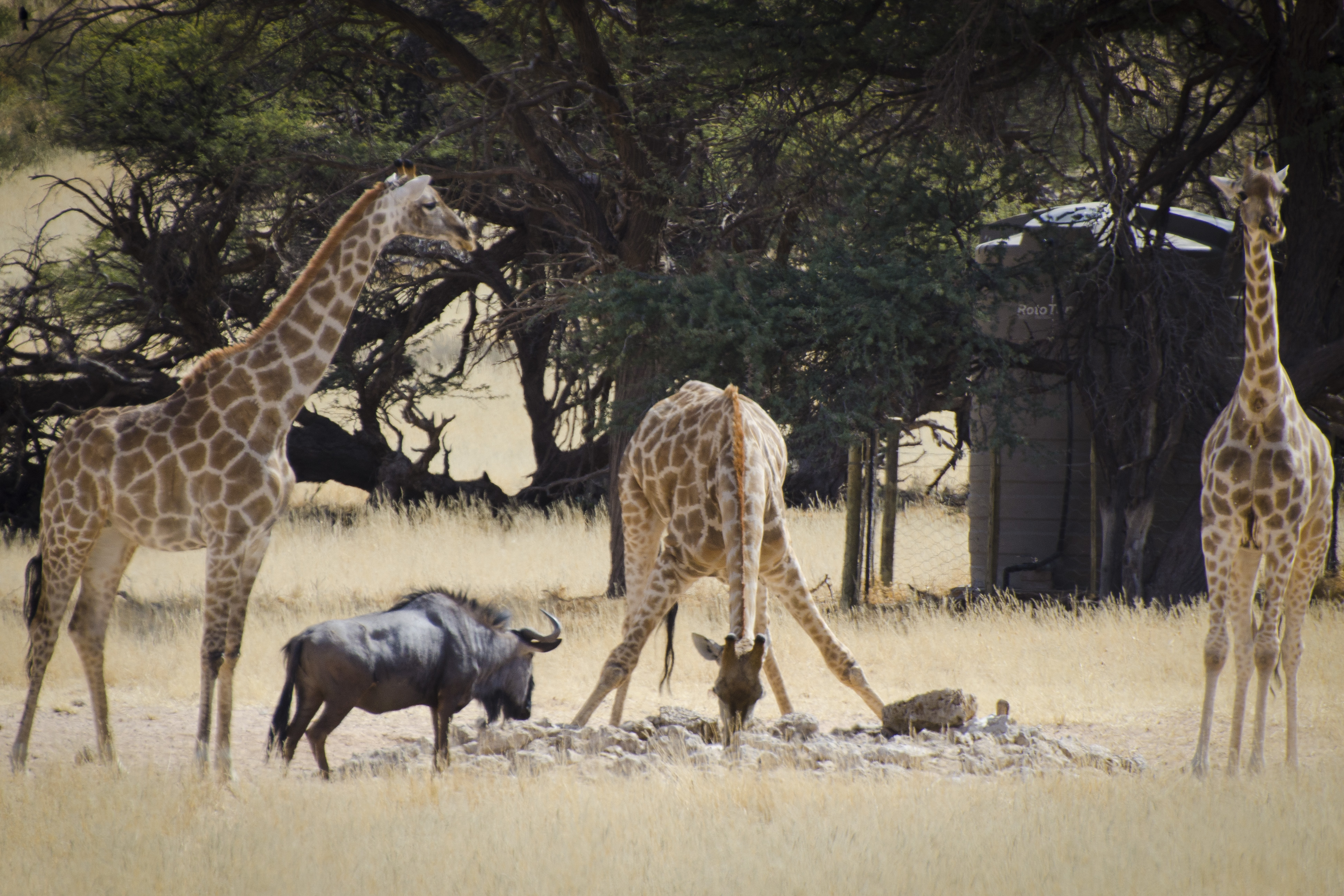 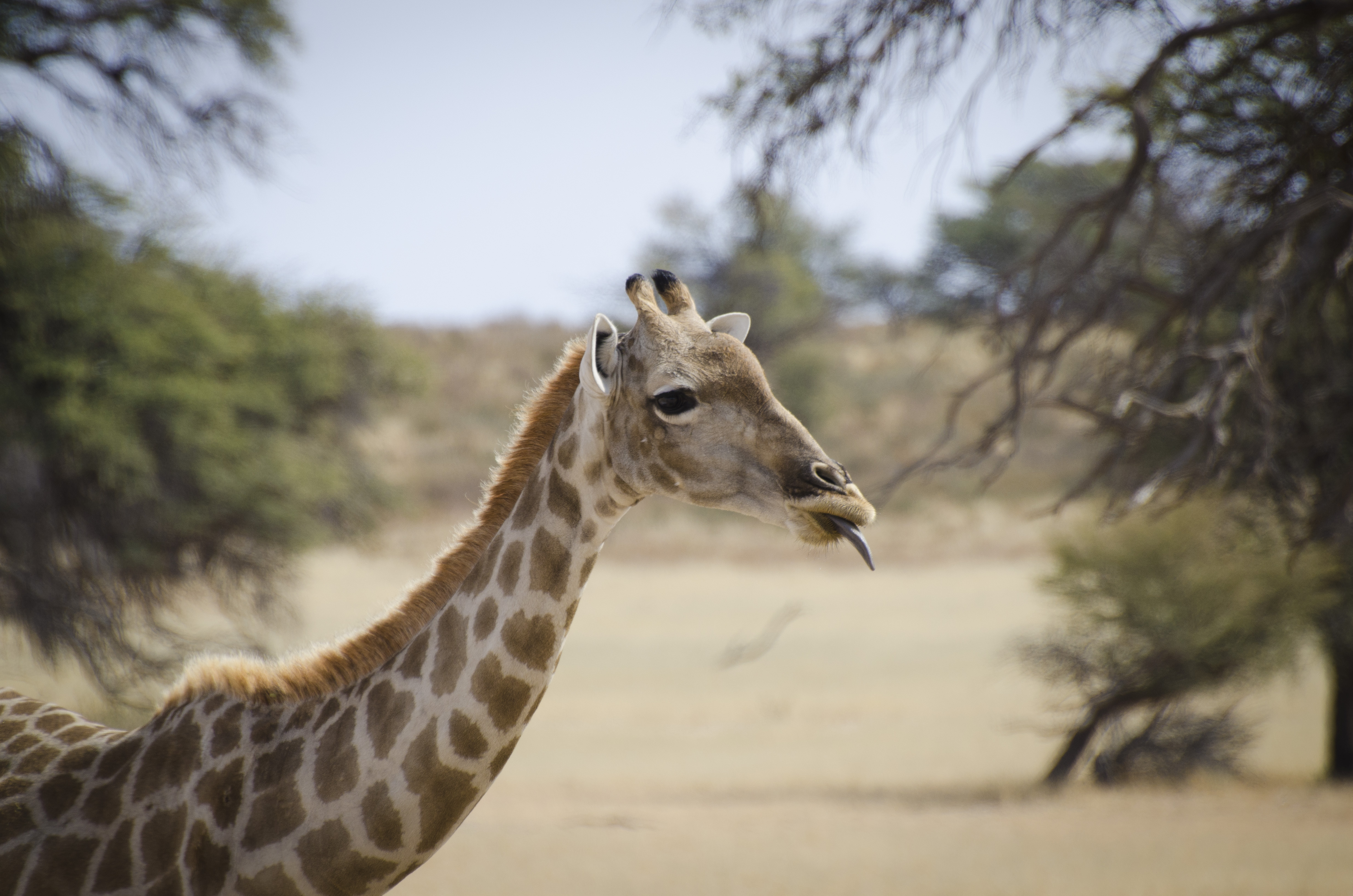 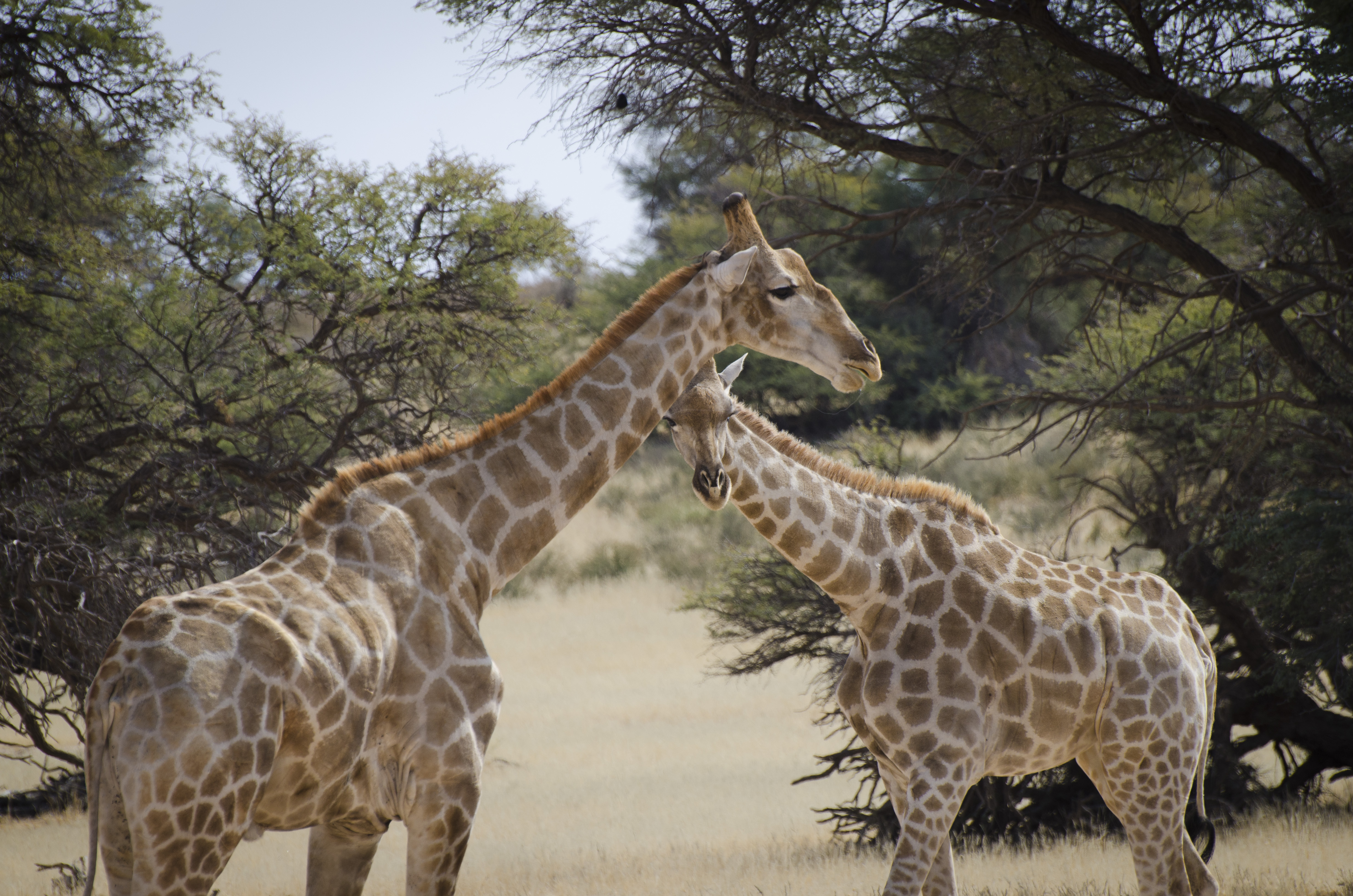 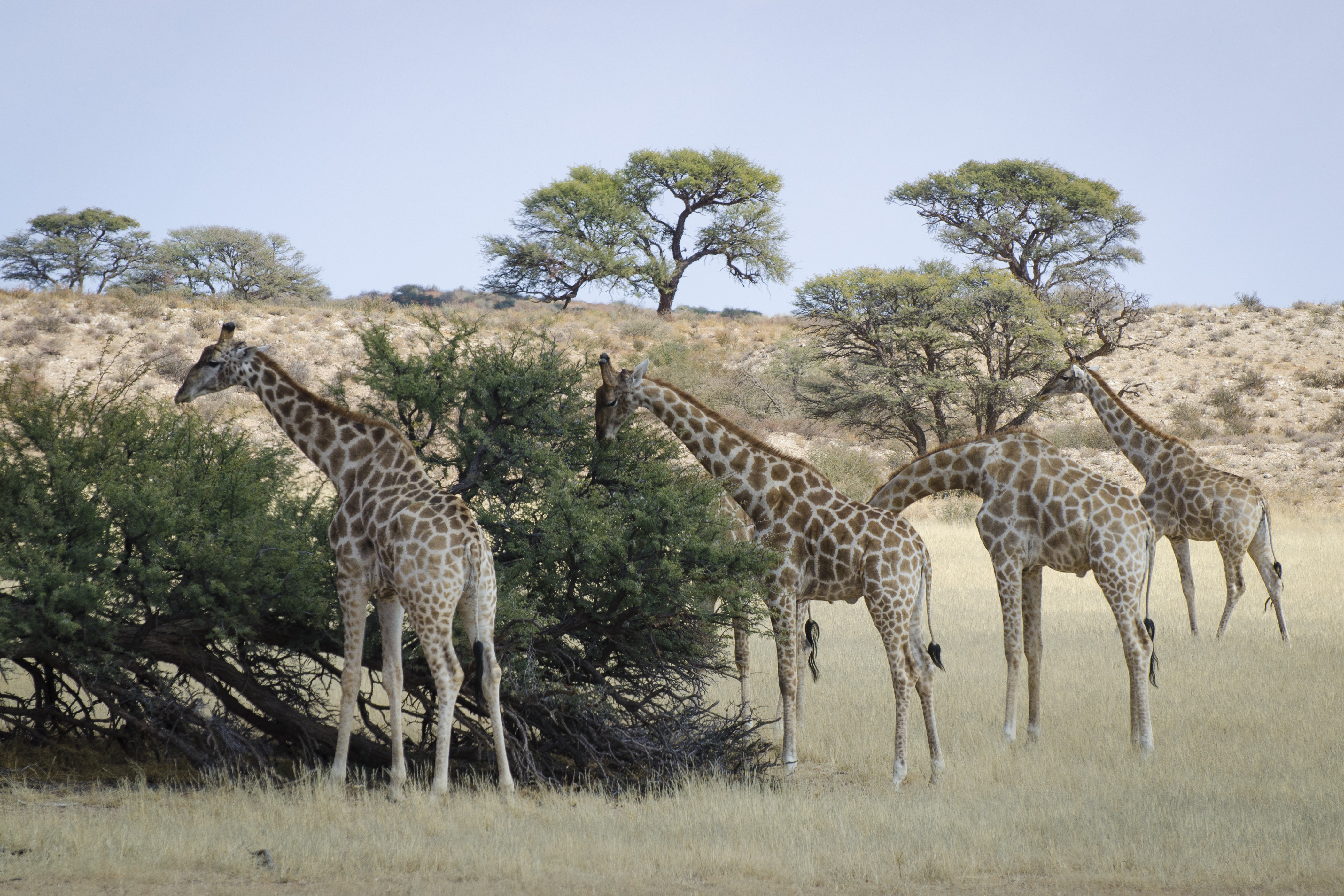 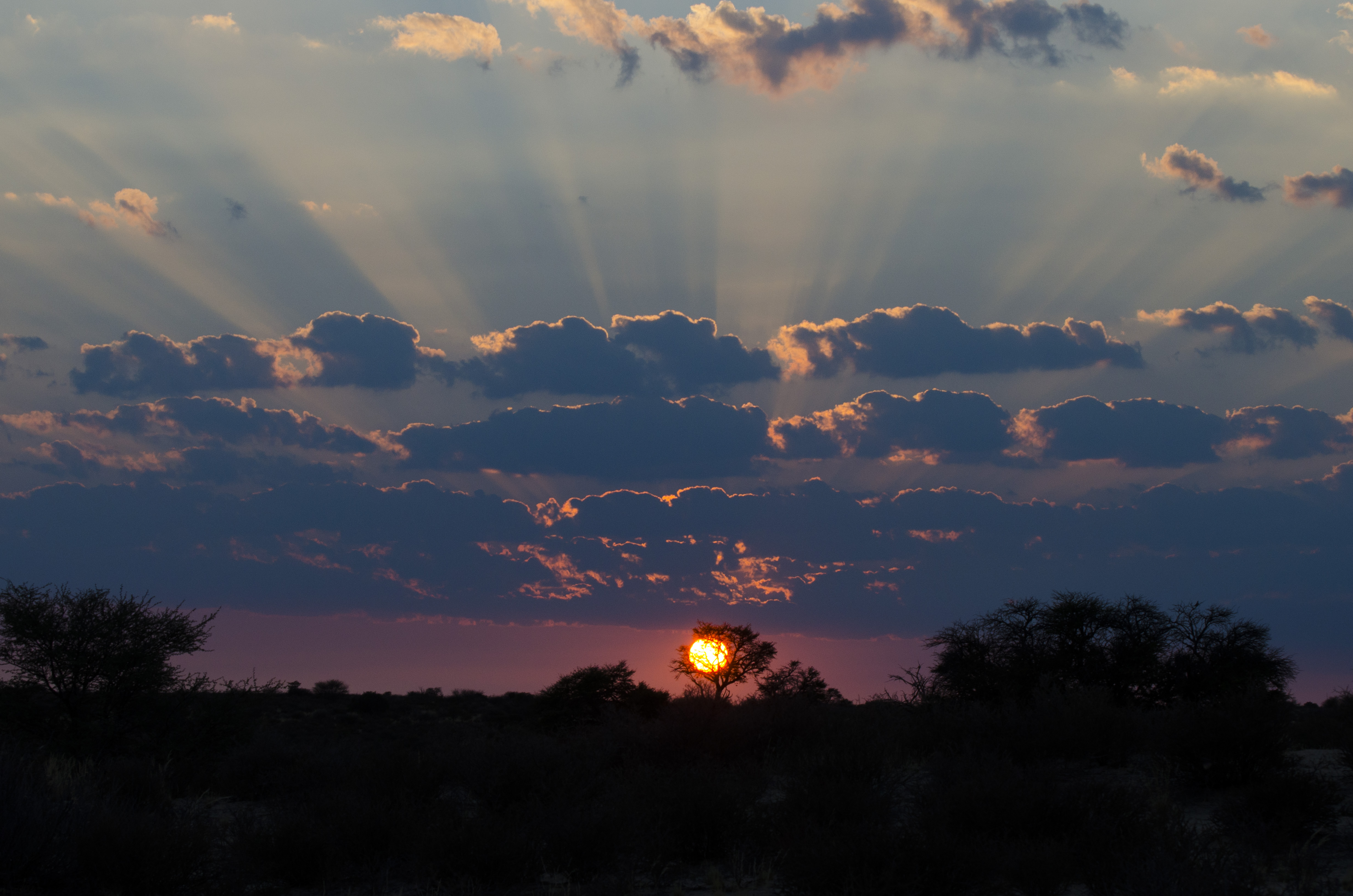 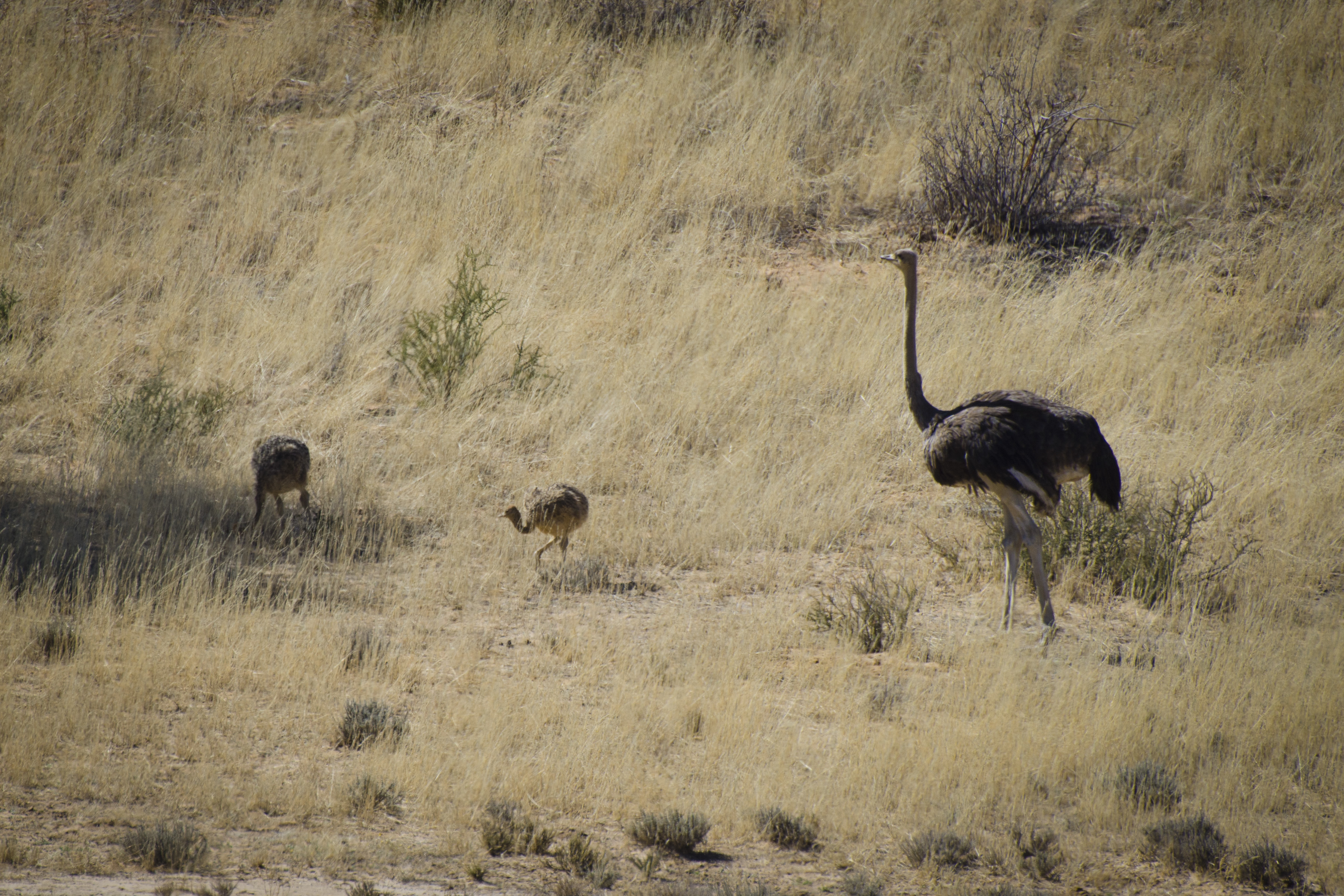 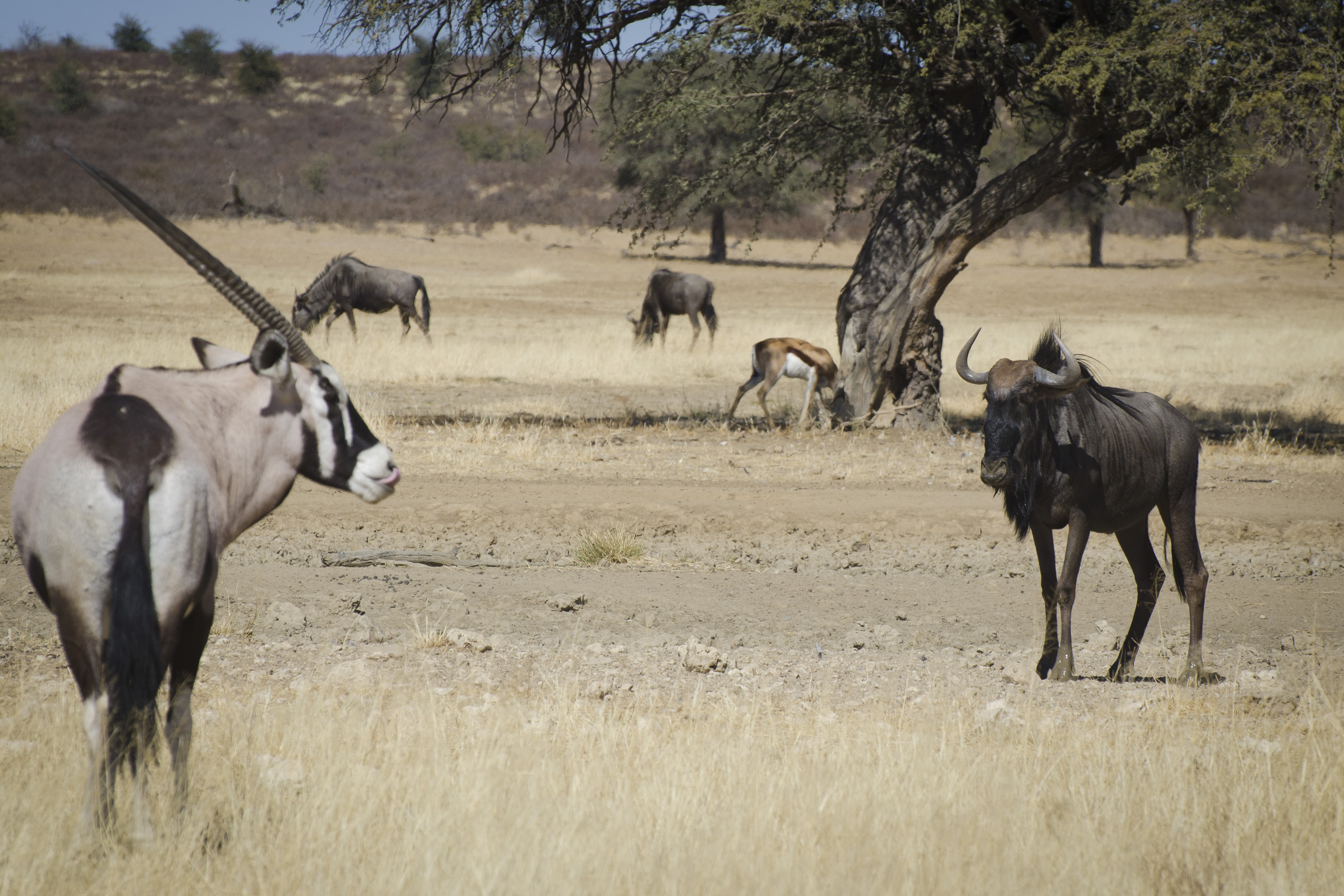 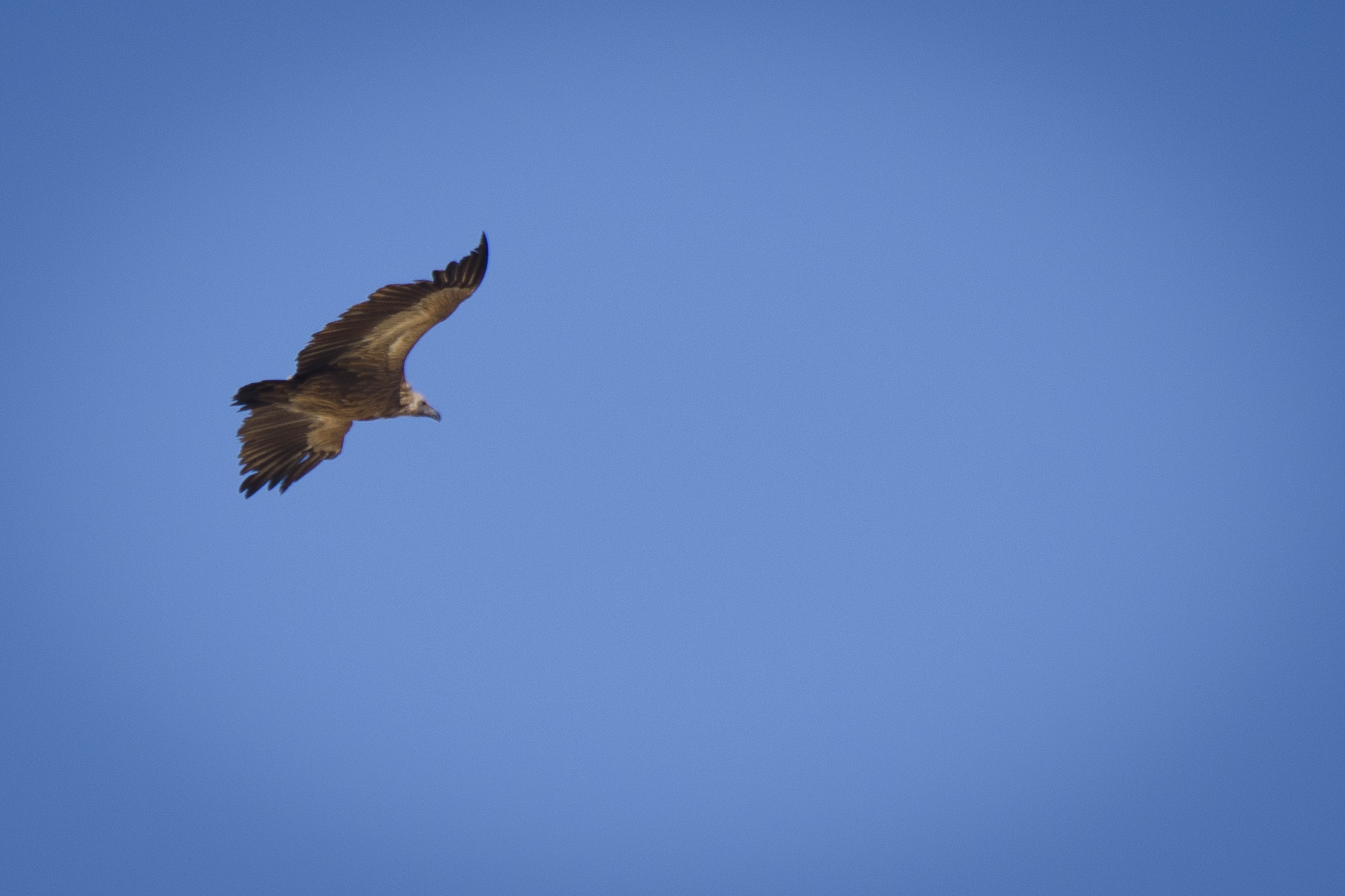 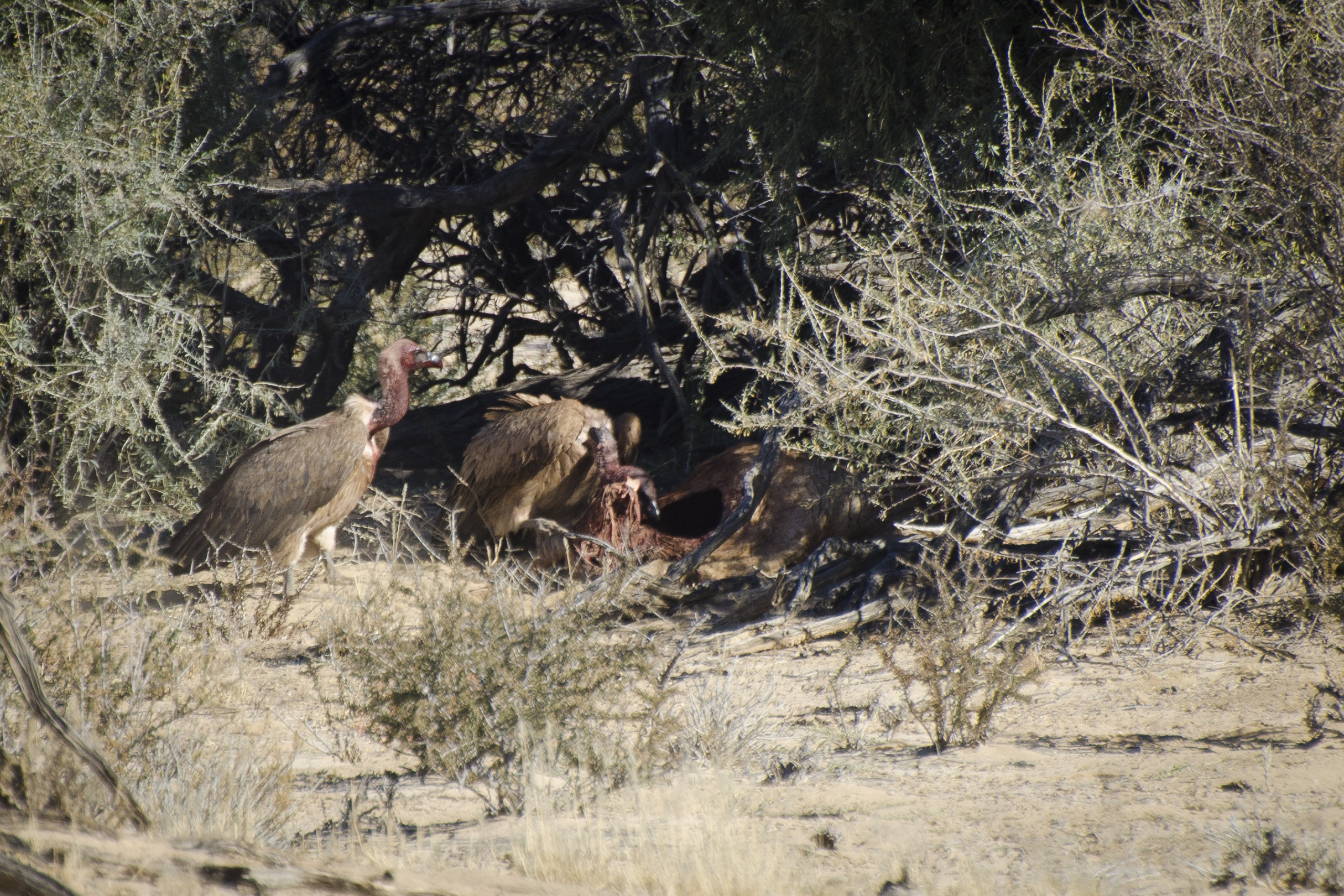 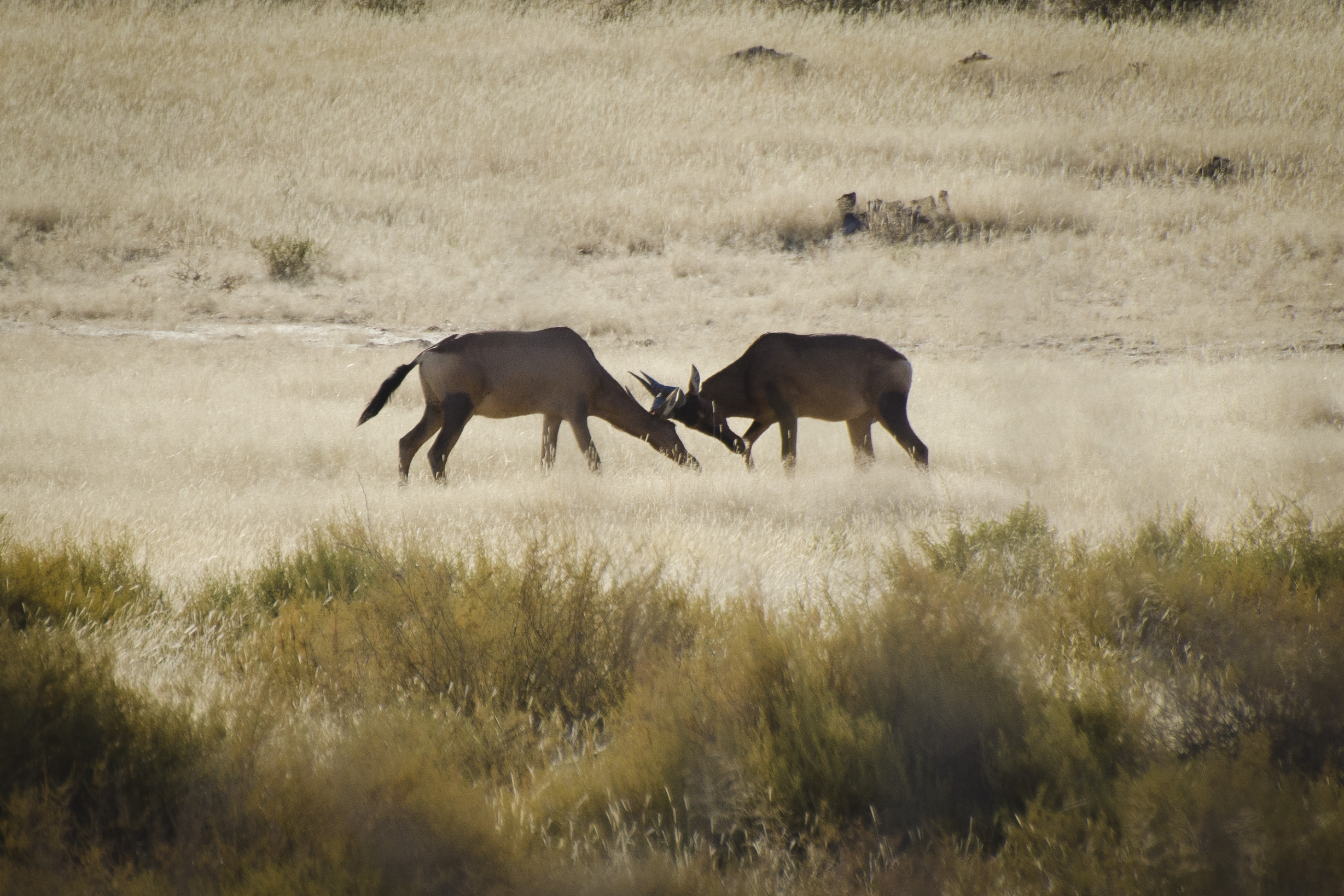 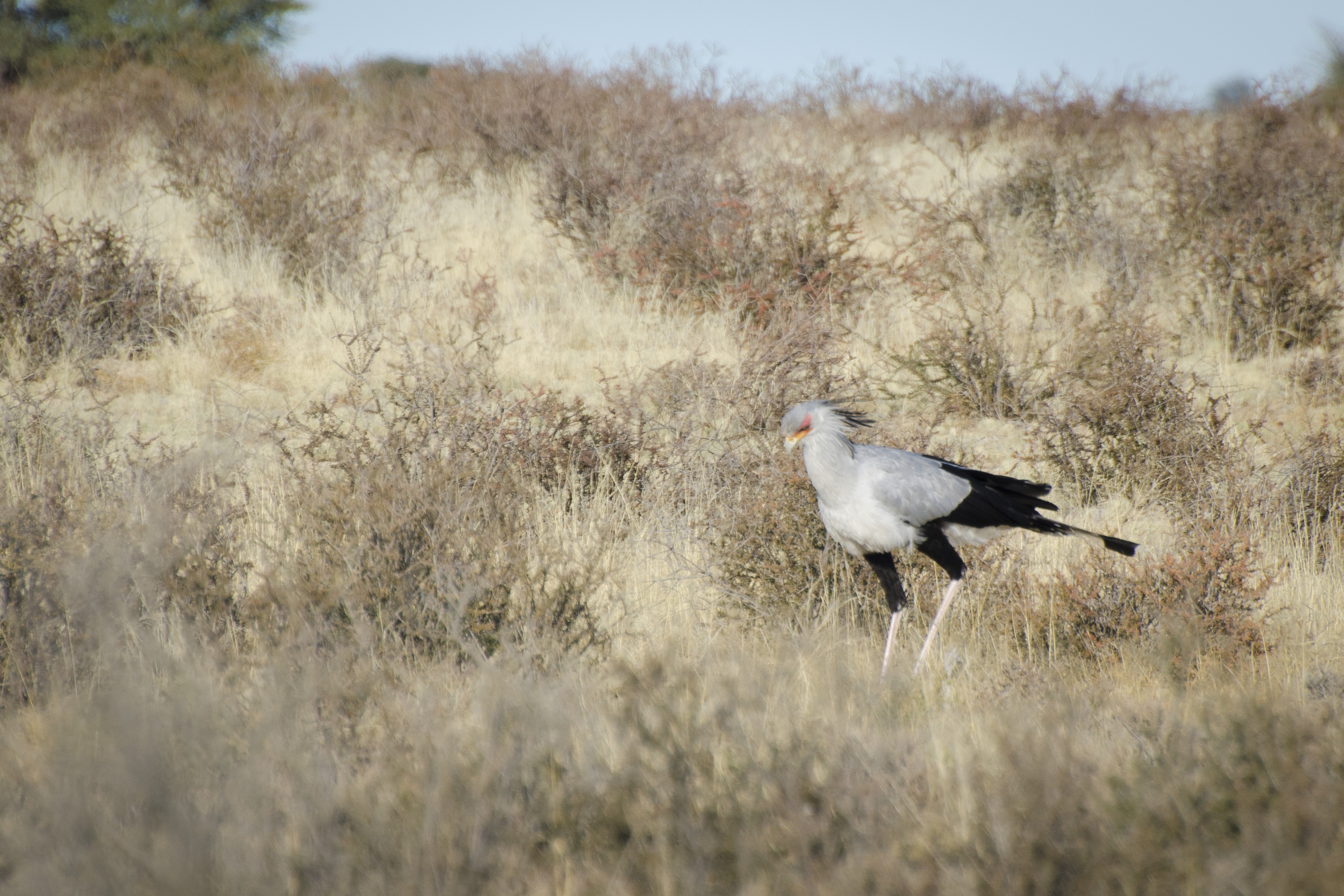 After all the excitement of the park we headed out the Mata Mata gate straight into Namibia. We arrived here a week ago, and I must say, on first glimpse, I wasn’t all that impressed. It was dry and dusty, nothing grew, and to make it worse, the roads were all sand. Urgh. But then we stopped for our first night at an unpretentious farm on the side of a high-way (made of sand), and got to enjoy a night of absolute stillness under the stars. It is a very black sky that blankets Namibia at night, and a very blue one during the day. We discovered the colours here are more vivid, even though at first everything seems brown, after you’ve been here a while you see the colours all around you. The sunsets are magical. You have crimson sky to the west, and if you turn around a rainbow of colour fills the sky to the east. The dust is everywhere, but you can forgive it its intrusion because of the magnificent sunsets it incites. Taking beautiful pictures is easy because there seems to be a permanent filter on the lense. But I’m beginning to wonder if the filter is on my eyes. I was always the person swearing never to go to Namibia because it was too dry, now I can’t stop telling people how amazing it is. It’s another one of those places you can’t adequately describe to people. My language of the place does it no justice. It’s a ‘feel’ place. The emotions this environment stirs up leave you wanting to see more, explore more. It’s vast and barren and largely devoid of people, but it gets into your soul.

That is until you hit the tourist spots. Big sigh. We seem to be here during European peak season. The country boasts a population of about 2 million people, but there seem to be double that in French, Italian and German tourists. It is heaving, in as much as a country this barren can heave 😉 Thankfully, there are some off the wall stops we’ve managed to find that seem legitimately local. One spot was a roadside ‘coffee shop’ with the best apple-strudel and homemade rusks we’ve tasted. It was conveniently located at the exact spot that Lincoln had a rather severe on-set of car-sickness. We enjoyed the delicious goods while poor Lincoln walked in circles around a rather beautiful garden creation, made out of old car parts, crockery and desert succulents. We considered driving back that way just to stop in there again, but thought Lincoln wouldn’t be impressed with us, especially given his propensity for car-sickness on those rolling dune roads.

We had to do a bit of a U-turn after we headed into Namibia, and headed back down towards South Africa so we could experience the Fish River Canyon and the Ai Ais hot springs. Unfortunately the hot springs are incredibly touristy and you aren’t allowed in the natural springs at all. You are allowed to soak in the warm waters of the hotel, which are pleasant enough, in an un-natural-chlorine-filled kind of way. You can see the place was once charming but it has unfortunately become a little run down and lacks the magic you’d imagine it had. It is still a phenomenal area to visit as it allows you to explore the Fish River Canyon from the end point of the 90km hiking trail. We did some exploring in the canyon as well as going to see the view from the top. It too, is extreme. It is similar in many ways to the Grand Canyon in the States, but thankfully lacks the size of those crowds. We did some geocaching with the kids and running around the top in an almost desolate landscape, before returning to the much frequented waters of the Ai. As much as we complain about it, it was nice to have some water to soak in, and it was hard to convince the kids we needed to move on. But we had ghost towns and desert landscapes to explore, and many more dirt roads ahead of us… 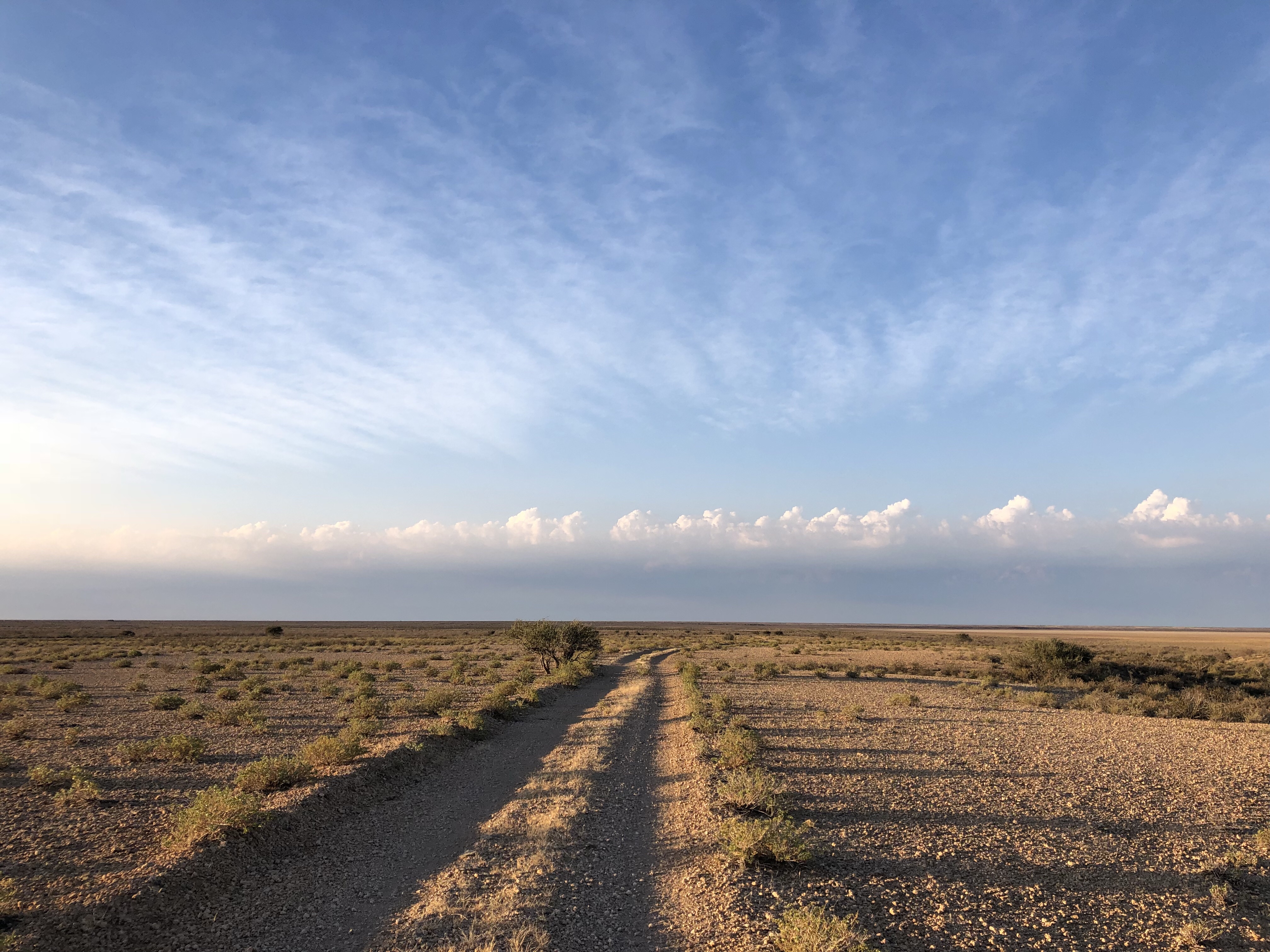 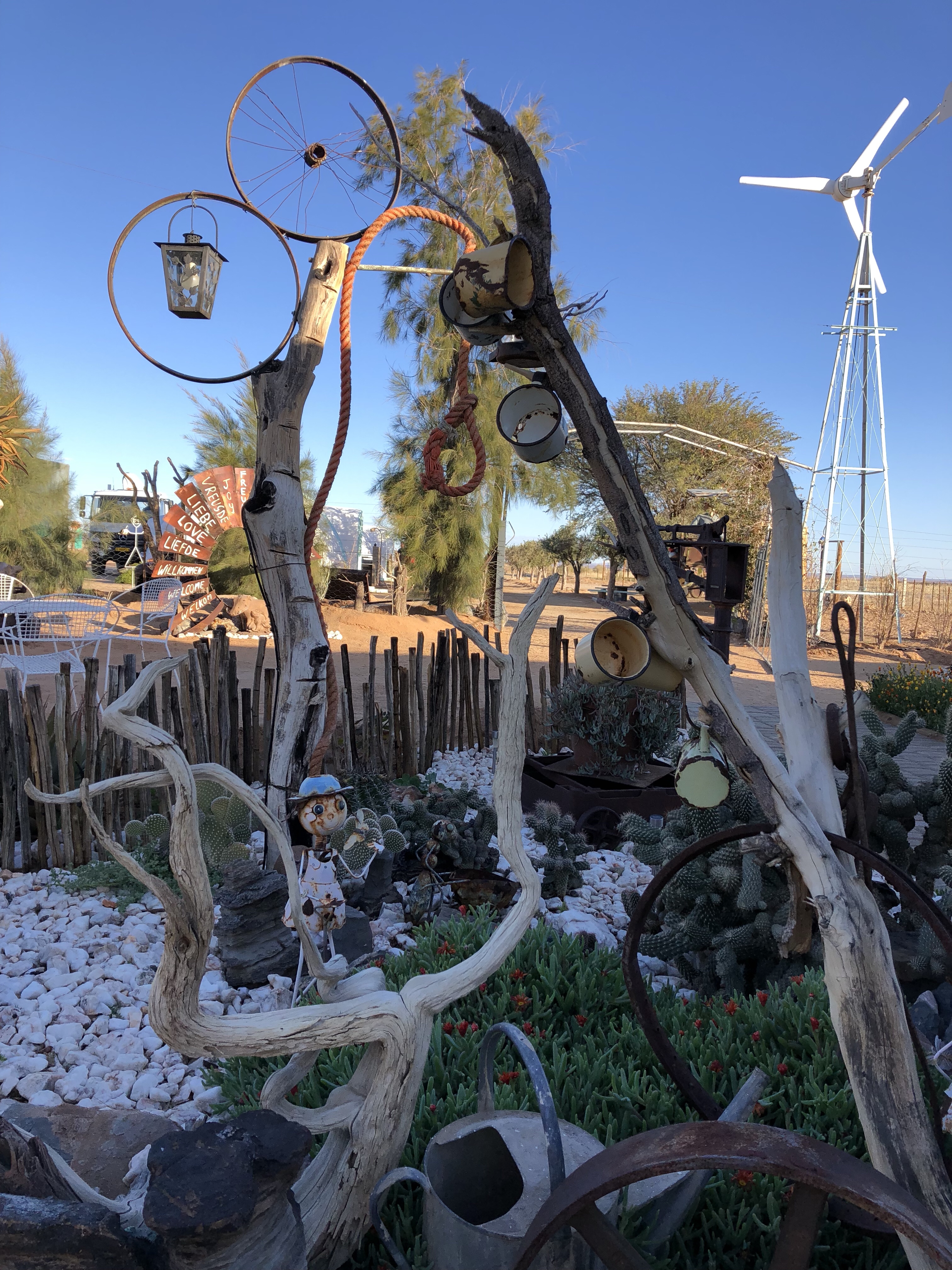 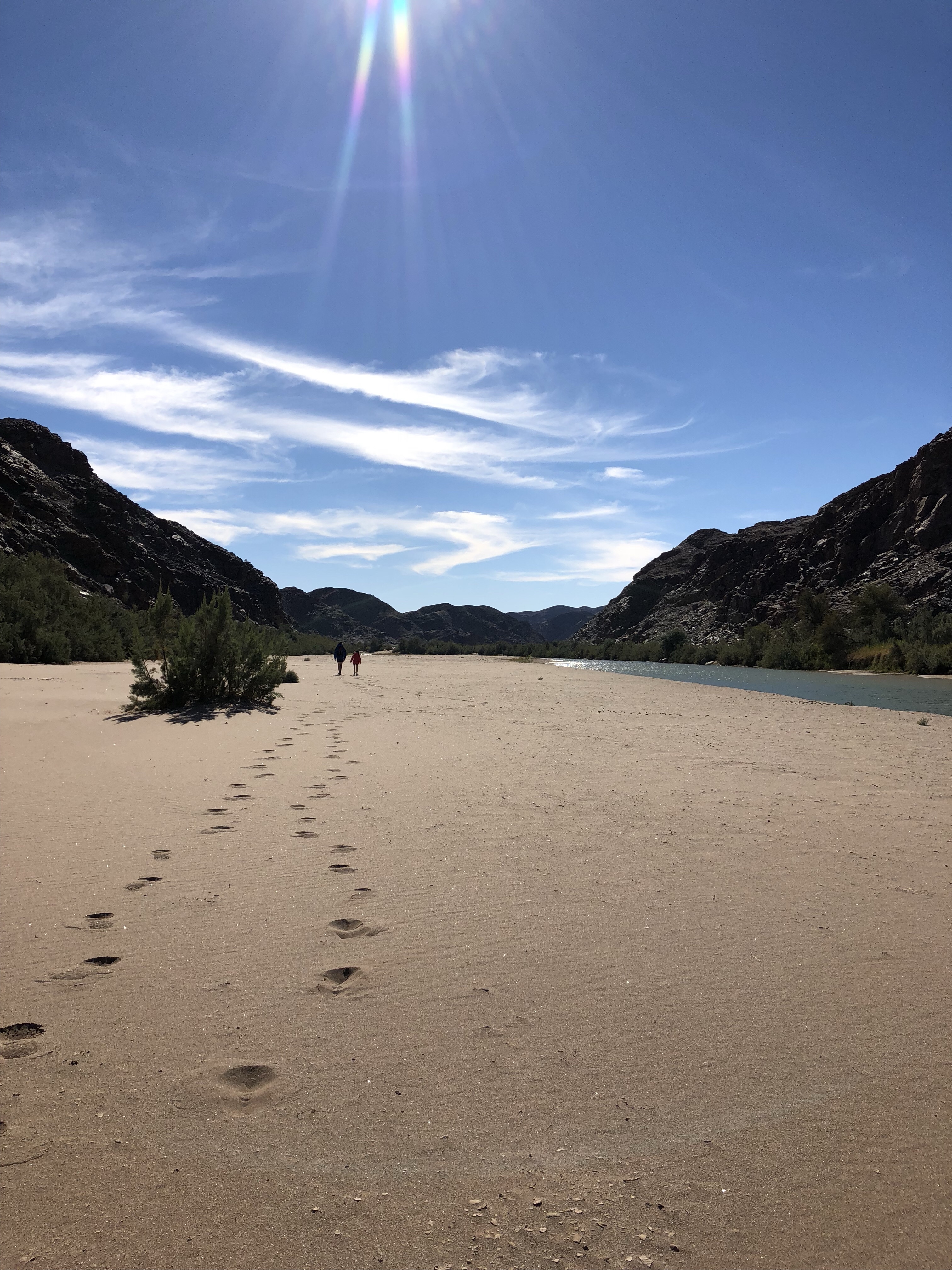 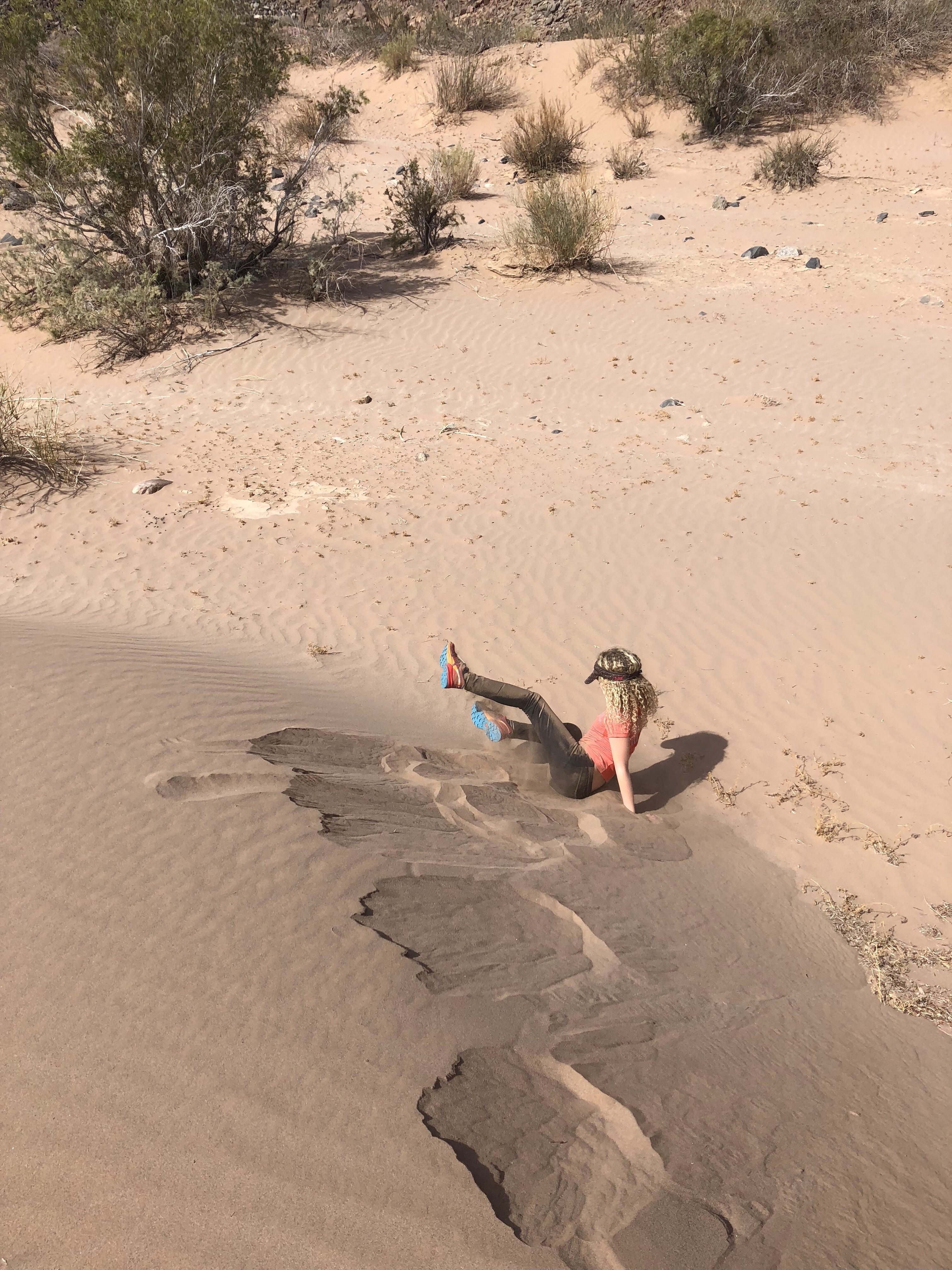 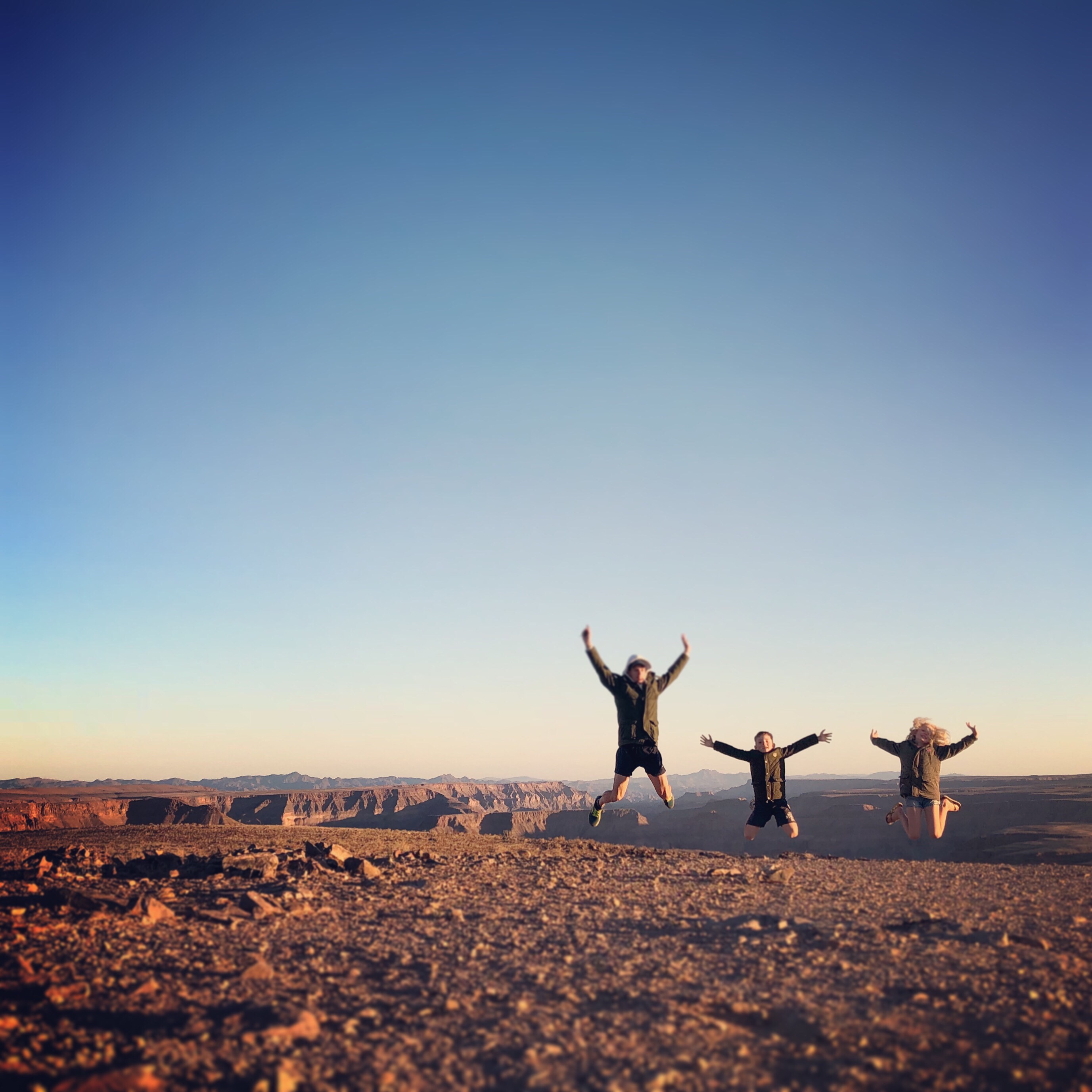 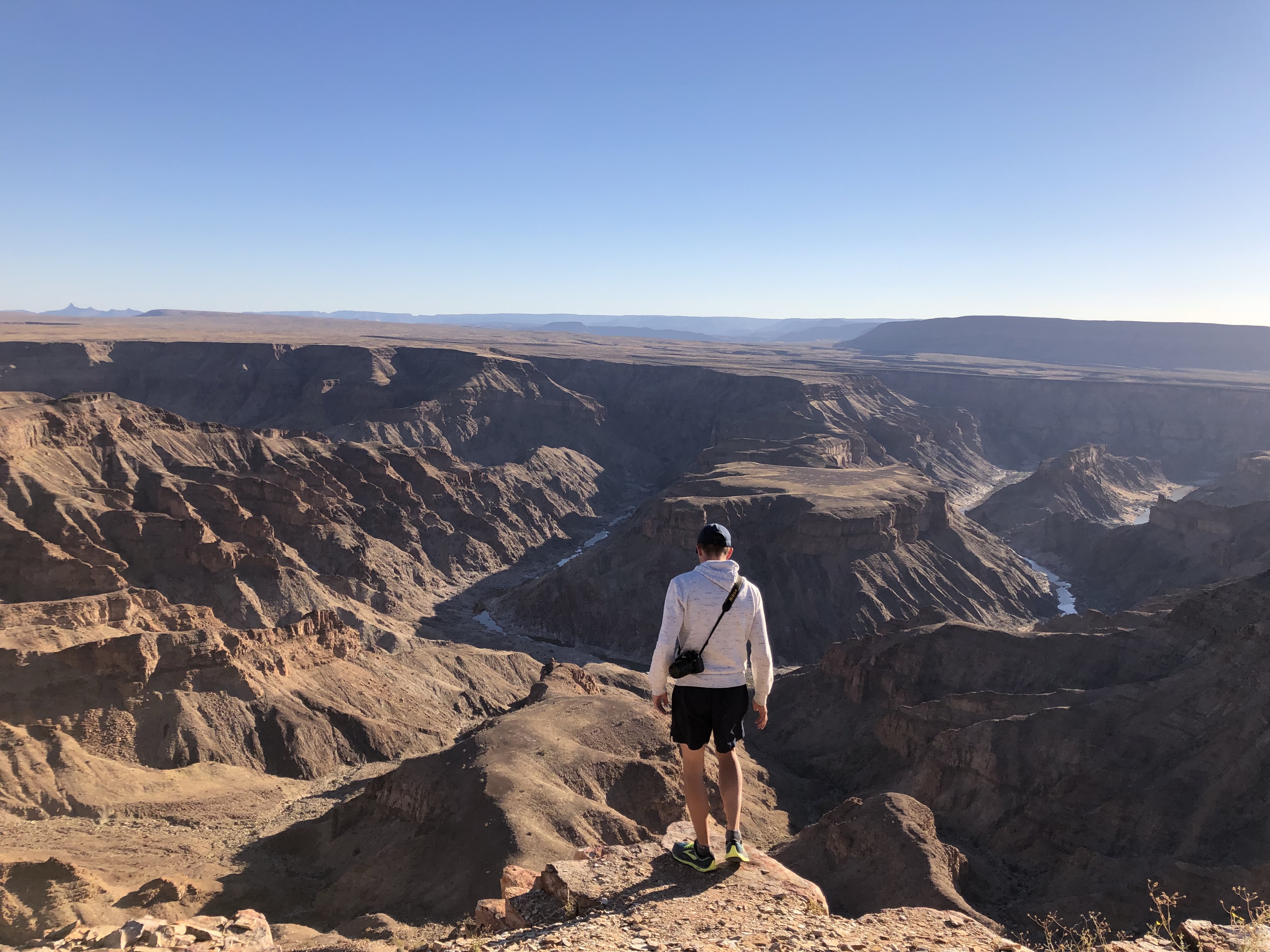 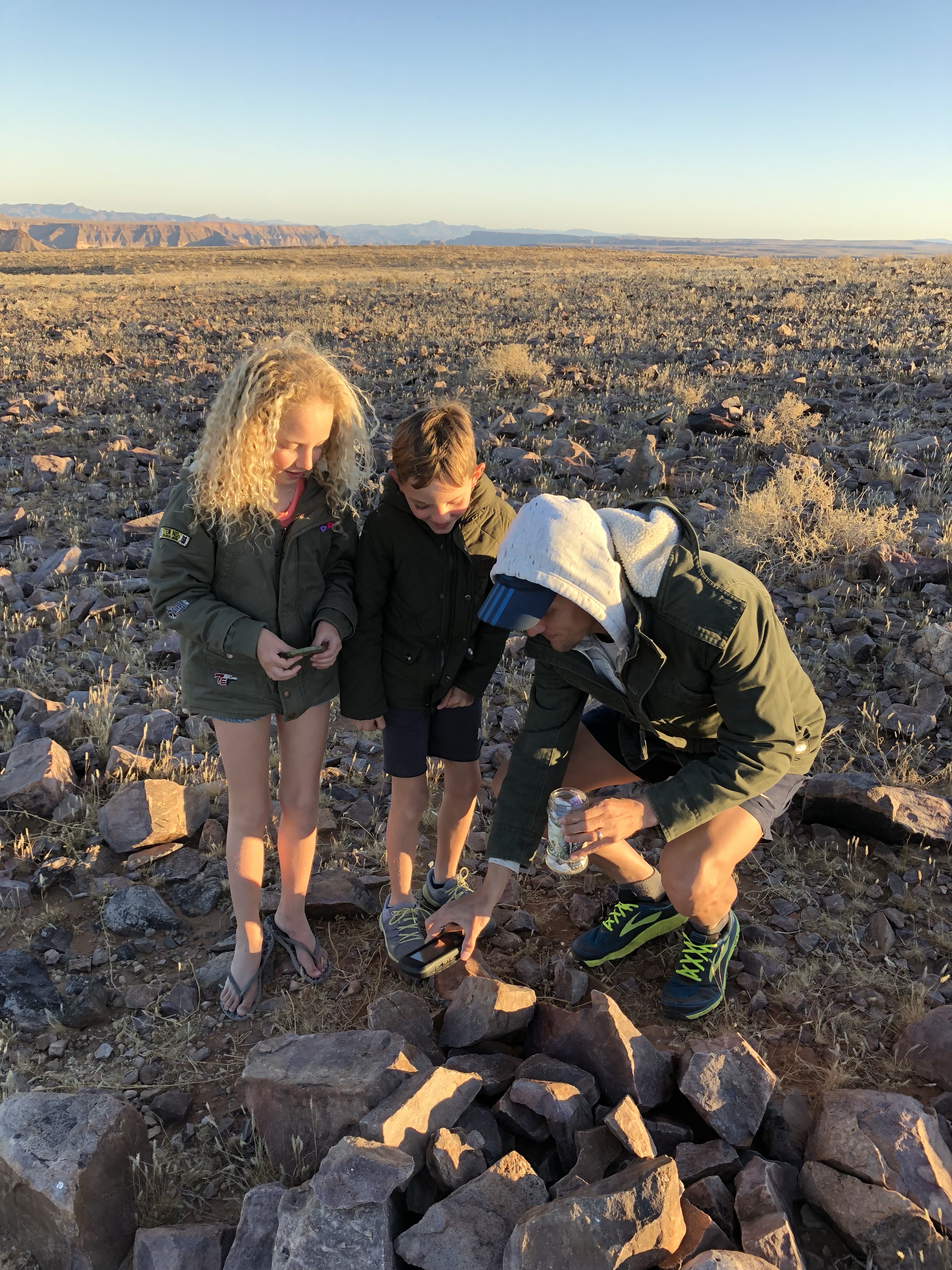 We have just arrived in Swakopmund, and finally have enough wifi to load this post. It means we are a little behind in communications, but will have another post to get you all up to speed soon.