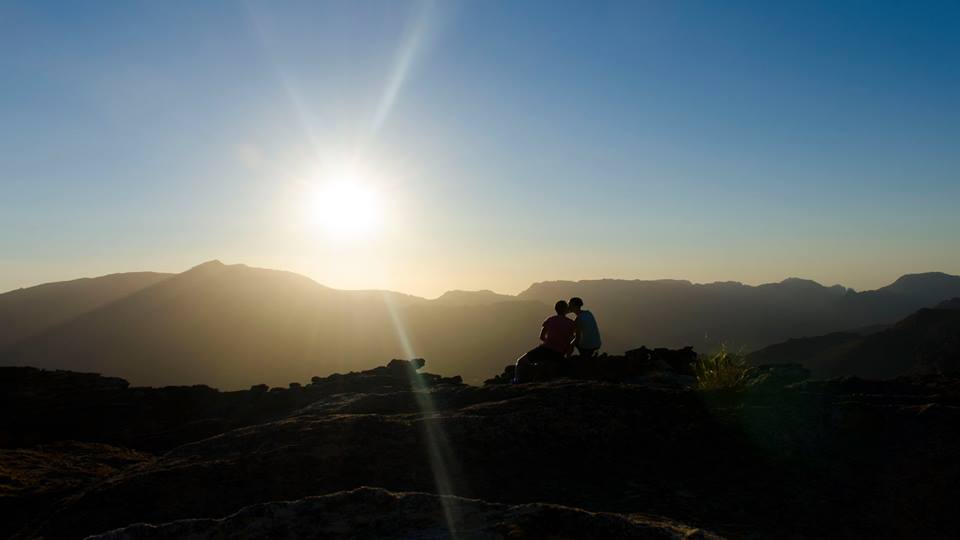 10 years ago, in our naïve youth, Shaun and I thought a honeymoon on the ski slopes would be awfully romantic. Log cabins, evenings around a roaring fire with mugs of hot chocolate, and long walks in the snow. This was of course before either of us had ever tackled the riggers of a ski slope. Our romantic notions were quickly put in perspective on day 2, when Shaun enrolled us in an advanced ski expedition which had me skiing backwards down a ski slope, on my head, simultaneously crying and spewing profanity, while South Africa’s only championship skier (who happened to be heading up the expedition) tried to talk me down the rest of the slope. After encouragement and guidance proved fruitless, even by the professional, I was tucked in behind him and guided down the slope in the same way I now do for my kids. This may or may not be the same day he ski-piggy-backed me down a slope (can you imagine the embarrassment) while Shaun made his own merry way down with all the glee of a 5 year old. It didn’t take long for me to figure out how our marriage was going to go. It was going to be adventurous, and tangibly challenging. It was going to push my limits and test me physically, and with every test I would learn more about myself, seeing more of what Shaun seemed to see from the very beginning. 34 years of life and I am still learning about me. 10 years of marriage and I don’t think there is much I have done that has surprised Shaun. There is more validity than is given credence in the old adage: Marry someone who continuously challenges you to be better, to be your best you. Find someone who’s going to push your boundaries, introduce you to places you’ve never heard of, and inspire you to do the unimaginable because they genuinely believe you can. If you’ve found that person, hold onto them. There is no greater gift.

Bearing this honeymoon ‘baptism by fire’ in mind, fast forward 10 years and wanting to climb Kilimanjaro as a 10 year anniversary holiday seems normal to us. Given we didn’t want to leave our munchkins alone for that length of time (and the expense of getting there) we settled on something closer to home, but no less majestic.

It seemed like an obvious choice, and a perfect escape. We wanted to do something together that we couldn’t do with the kids, use the time together to really be together. 10 years of marriage is an accomplishment, and a privilege. We wanted to honour that by doing something worthy of that feat. I can’t think of a more solidifying experience for a marriage than climbing mountains with your life on your back, and your love by your side. Sometimes you walk hand in hand, sometimes on your own. There is talking, lots of talking, remembering what it is to just shoot the breeze and laugh about silly things together. No constraints on your time, no one expecting anything from you. Just being together. Sometimes there’s negotiation, and sometimes stubbornness, but let’s be honest, what’s marriage without some stubbornness. Hiking requires encouragement and consideration of your partner, a reminder of 2 of the most important elements in any marriage. It’s not easy-going the whole way, but you’re doing it together. That’s what makes it fun and worthwhile.

We didn’t want to stray too far from the norm, so as is customary, we bit off a little more than we could chew. We started off with 4 days of hiking, but after deciding to squash it into 3.5 days in order to get home to see the kids, it required our walking faster than we had initially planned.

We arrived in Sandrif, central Cederberg, on Friday afternoon. After a minor deliberation we headed straight up the mountain so we could camp on the top instead of in the campsite at the bottom. It was our anniversary after all and we wanted something a little more romantic than the snoring of fellow campers around us. So after filling up what seemed like an excessive number of water bottles, we hit the mountain. Saying it was steeper than we had anticipated is an understatement. We hadn’t weighed our packs before we left (probably a novice error) so we ‘guestimated’ the weight at around 30kg’s in Shaun’s pack (I could barely lift it), and around 25kg’s in mine. I had about 3 litres of water, almost all the food for 4 days, my clothes and sleeping bag and mat. Shaun had about 5.5 litres of water, the cooking equipment, camera, kindles, tent, his clothes and sleeping bag and mat. I couldn’t have carried more, and declined his generous offer of an additional 2 water bottles tied onto my pack. After starting up that hill I patted myself on the back for my wise decision. We stopped periodically for Shaun to sit down and put his head between his knees so he wouldn’t pass out. An anniversary scraping his remains off the bottom of the mountain would have been slightly less romantic. To put the extremity of the mountain in perspective, we managed to walk 4 km’s in 2 hours! It was slow going, but the top was worth it. 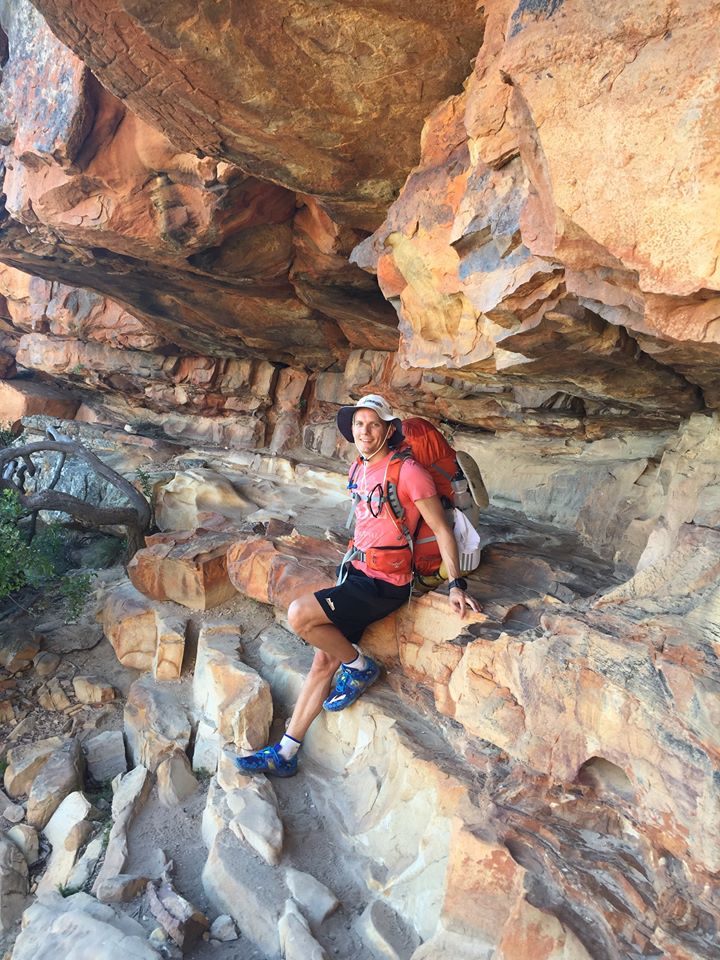 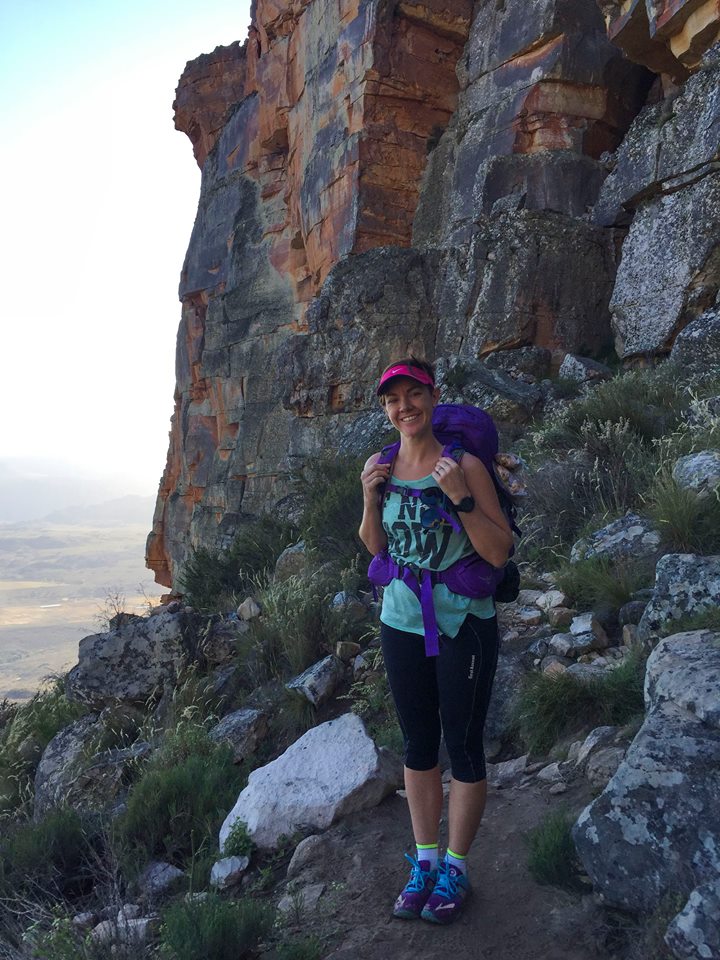 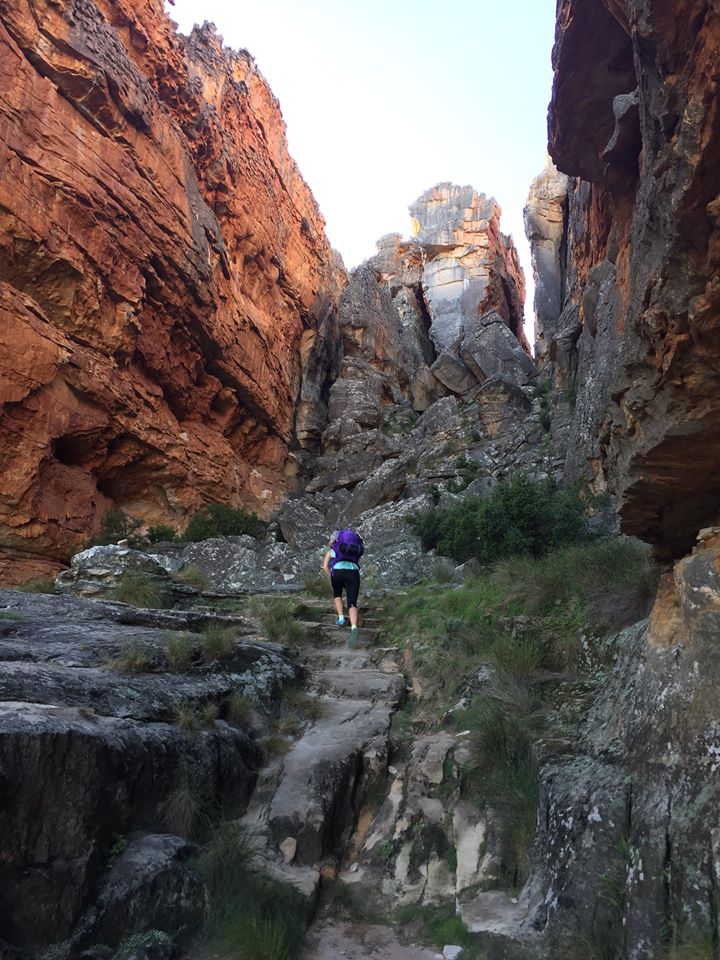 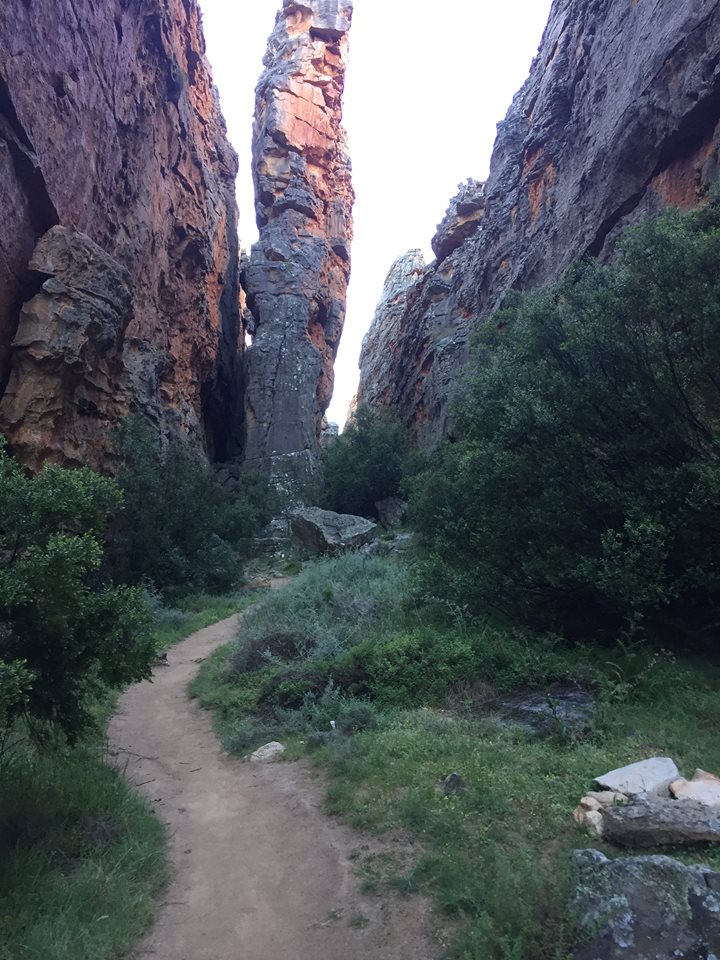 We enjoyed an anniversary dinner of cous-cous and bolognaise sauce, which I managed to sneak up the mountain in my pack as a surprise ‘treat’ for dinner. There was no champagne or hors d’oeuvre, but there was scintillating company and a sparkling sunset. There are no words to explain the calm and beauty of a night alone, on the top of a mountain, with only the one you love for company. 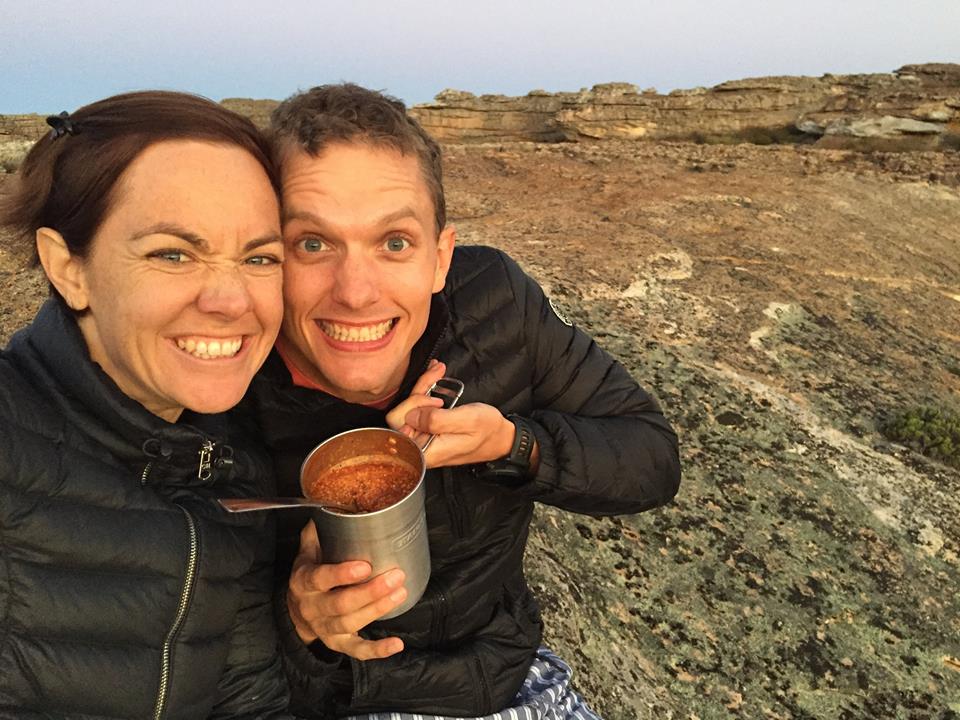 After a peaceful night’s sleep and a sunrise awakening, we began our first full day’s hike. It took us across the top of the mountain and through arches of towering rock formations. We spent 2 hours over lunch basking at a rock pool enjoying each other’s company, and the next half hour in a domestic dispute over which way we should walk. Shaun was keen to bush whack over the top of the mountain, forging our own route to the base of the Tafelberg peak, while I was rather keen to keep my shins in tact and follow the tried and tested path around the base of the mountain and back up at the allotted point. Obviously my argument was more sound, but it did add on an extra 10km’s of walking. By the end of day 1.5, and 18km’s of walking, watching the stars come out was about all we could manage. We spent the night in a cave at the ‘almost’ top of Tafelberg. 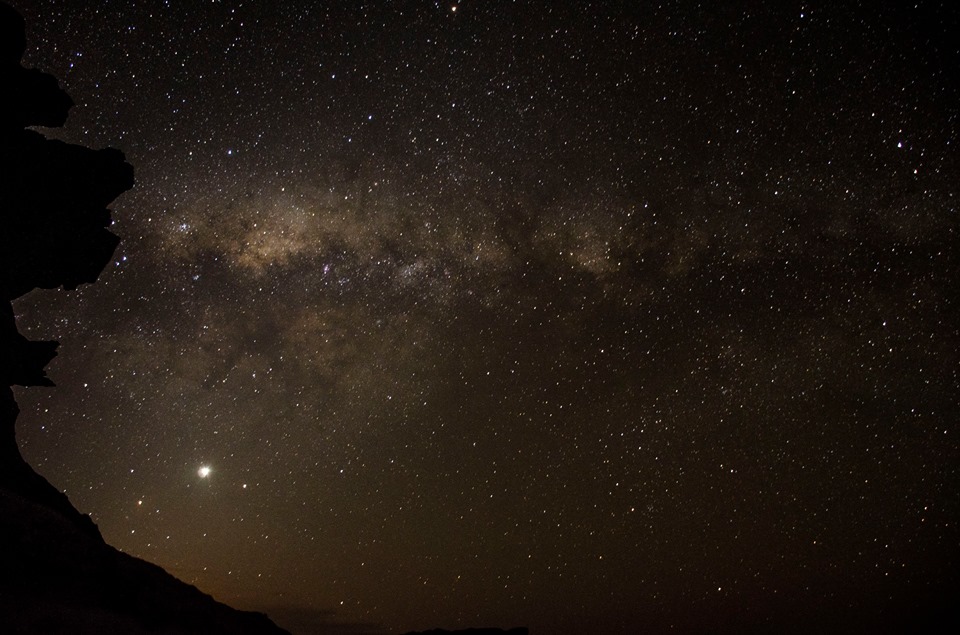 The milky way from the top of Tafelberg

The ‘real’ top of Tafelberg we summited the following morning, without packs! It is virtually a sheer rock face and requires ingenuity, scrambling expertise, and a ferocious sense of adventure to reach.

Well. Worth. Every. Gruelling. Moment.

You really do feel on top of the world and the view is all the more rewarding knowing how hard you worked to get there. 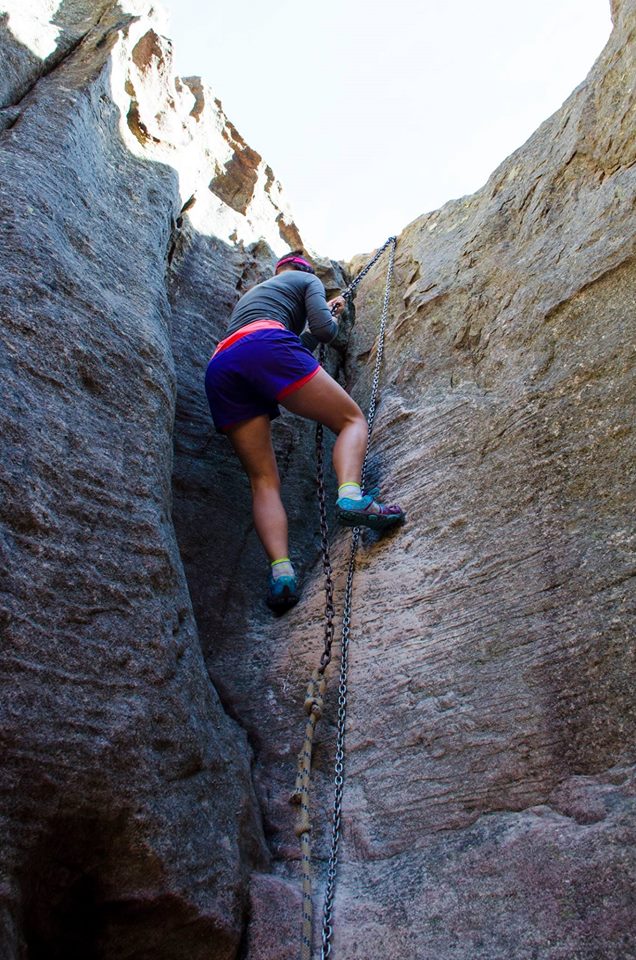 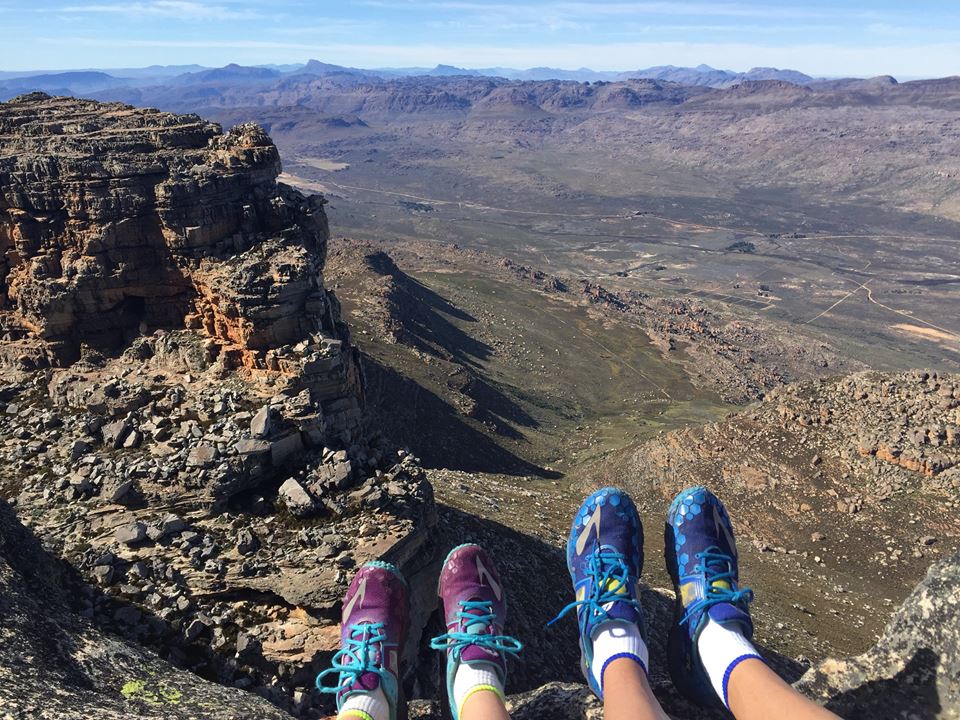 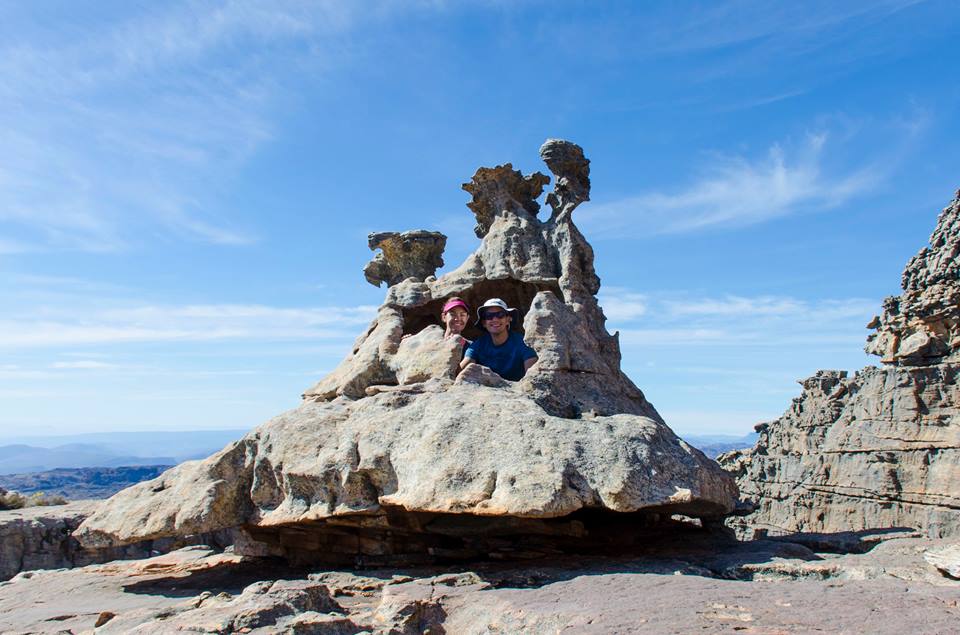 After descending and collecting our packs from the cave, we ventured forth on our intrepid way, making a long journey to the most serene water hole, aptly called Crystal pool, where we made the most of the icy water and basked on the rocks, while devouring abundant dry crackers and sharing our rashes of tuna. I realise it may sound daft, but a more romantic scene you’d be hard pressed to find. This may, in all likelihood, require repeating the exercise yourself to believe it. It sounds strange indeed, but it was pure beatitude. 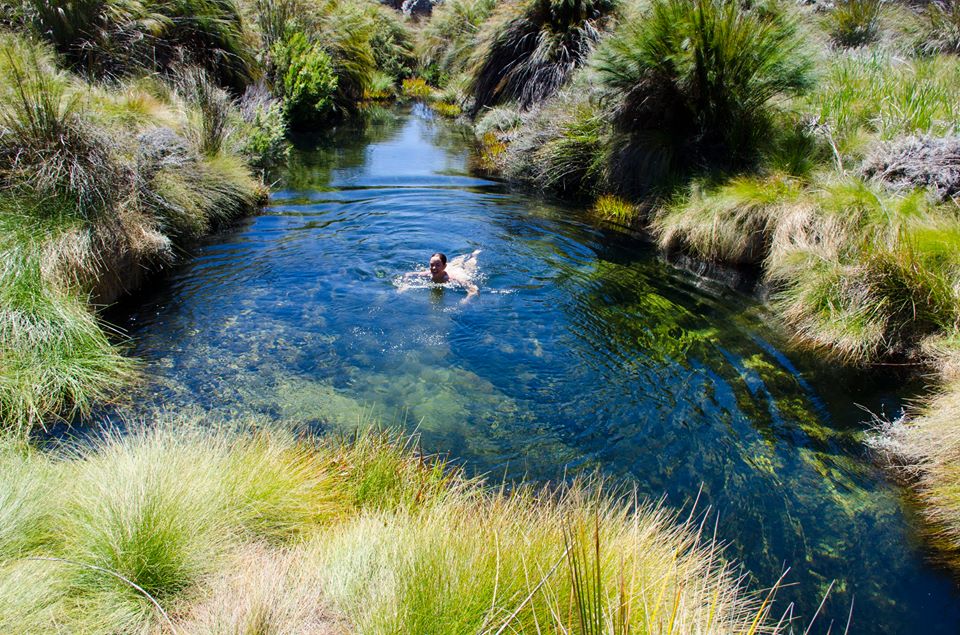 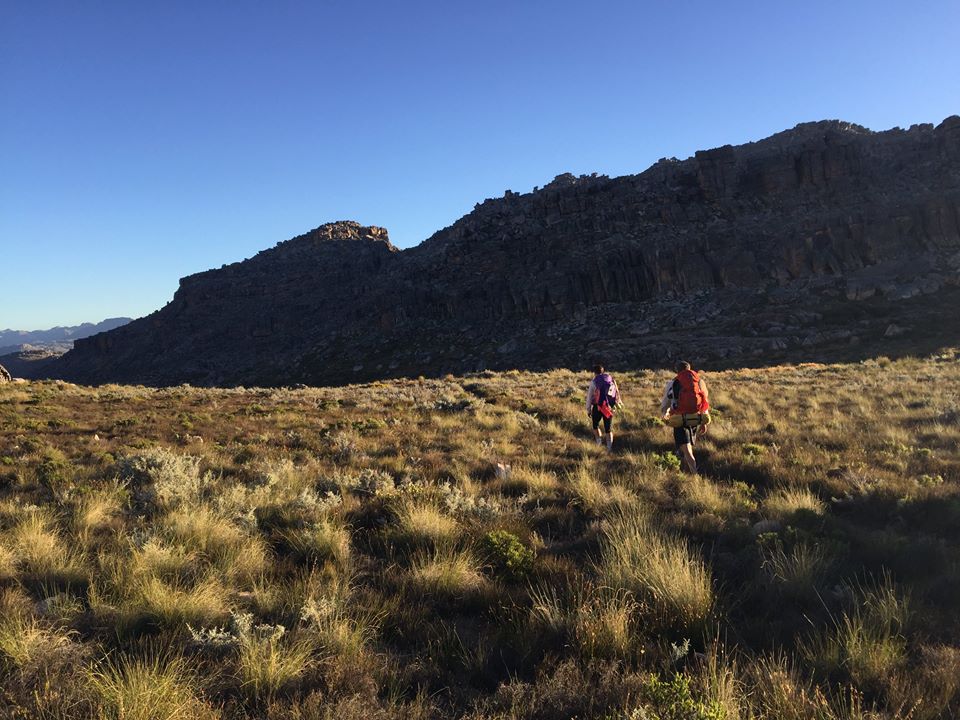 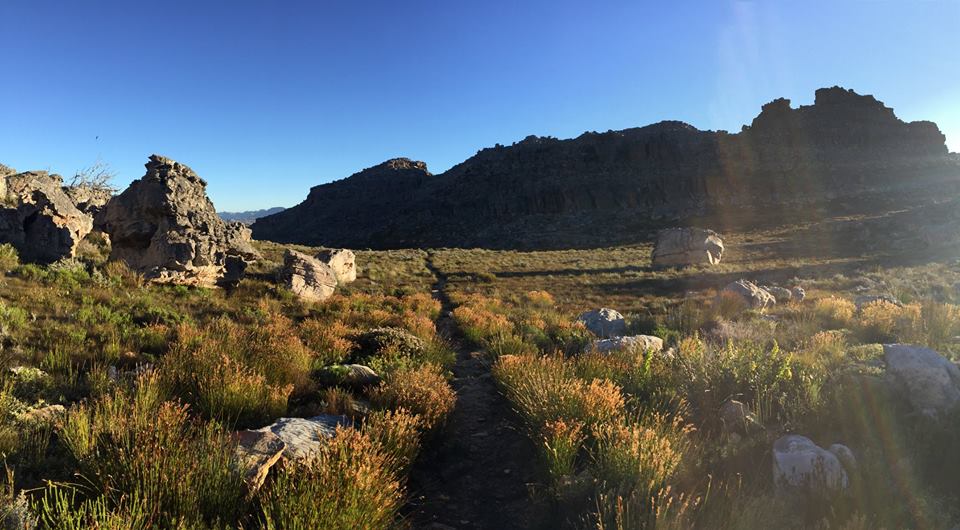 The 24km’s of walking on day 2.5 was everything I could have wished for and more. We crisscrossed through valleys of interchanging vegetation, and spent hours in lush surroundings with nothing but birdsong and flowing water to interrupt our solitude. We ‘tracked’ leopard footprints (tracked may be a strong word, leopard may also be a strong word, but in our excitement we went with it) and fired our best guesses at birds that soared above us. After paths of unruffled serenity, we found a perfect camping spot on the edge of a peak we have fondly named ‘Anniversary mountain’. From our vantage point we could watch the sun set, and rise, from the luxury of our tented paradise. 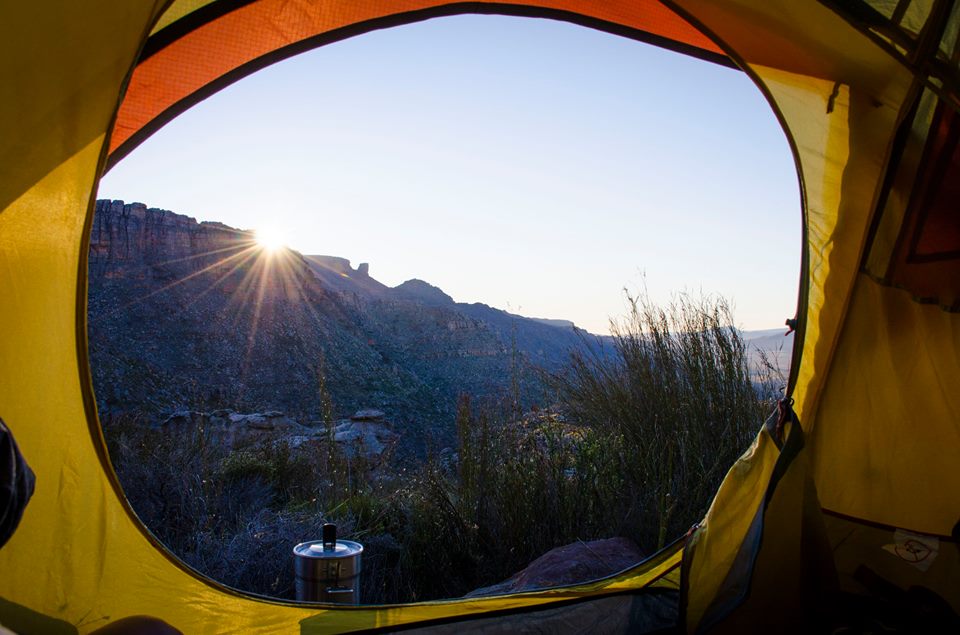 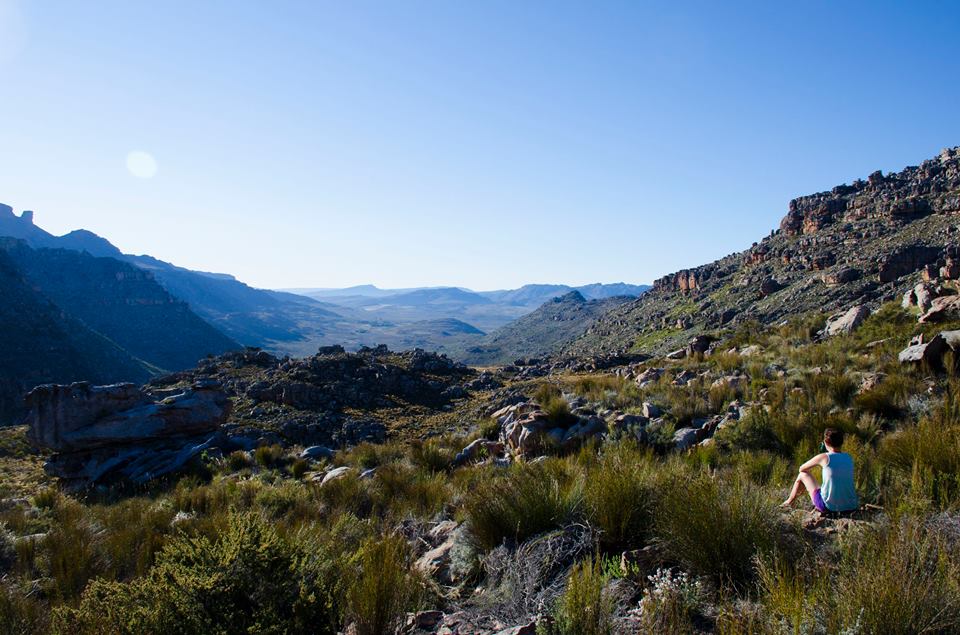 Packing up to leave our spot the next morning was eased only by the thought that the quicker we did it, the quicker we could get home to see our kiddies. This was the carrot we needed to get our stiff arses up and moving. The weather for all 3.5 days was nothing short of perfect, but this last day was a scorcher. We had to summit only 1 mountain on our return journey to our trusty steed, another 24km’s away, but it was a torturously hot mountain. Thankfully we hit it early and spent the rest of the day pouring water on our clothes in an abortive attempt at keeping us cool. And, with a Garmin for company, we were able to count down the km’s to the shower blocks at the camp and the air-conditioned comfort of our beast (a KIA Sorento – not a horse, in case you were wondering).

To seal off a truly romantic weekend, we showed the staff at the only fast food restaurant around, just how quickly a hamburger can be consumed, before blazing through a 3 hour journey to make it home before the kids’ bed time, so we could kiss those soft, delicious cheeks we had been missing for 4 days. Day 3.5 was worth the hustle. It was the gravy on the mash potatoes. The frosting on the doughnut. We love our kids, obviously. But we really really actually like our kids too. Like we want to spend time with them because they are awesome people. It makes us want to go home to them.

We knew we had pushed the limits to get home to them early. We have pushed the limits every year since we’ve had them, and we were doing it before that too. Sometimes the limits aren’t physical, a lot of the time they’re mental, but every limit pushed, stretches and shapes you. It defines your resilience and points out your verges. Although certainly not all pleasant, I am thankful for the challenges we have faced. They have shaped memorable moments, and made the sweetness of each day that much purer.
With the gift of hindsight, would I choose skiing for our honeymoon a second time round? Well, no, because we’ve done it already. Now I might choose a voyage to Antarctica, or summiting the Matterhorn… There are so many limits waiting to be pushed, and I count myself amongst the lucky ones to have found the steady hand at my back, pulsating encouragement and a quiet assurance in my abilities. 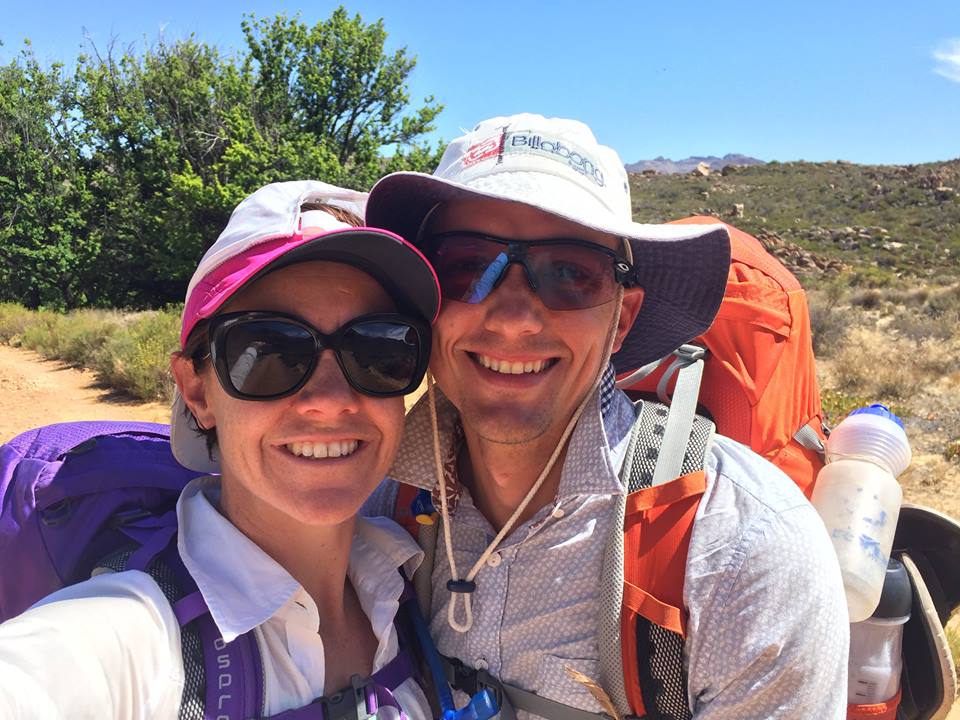 Alive at the end. 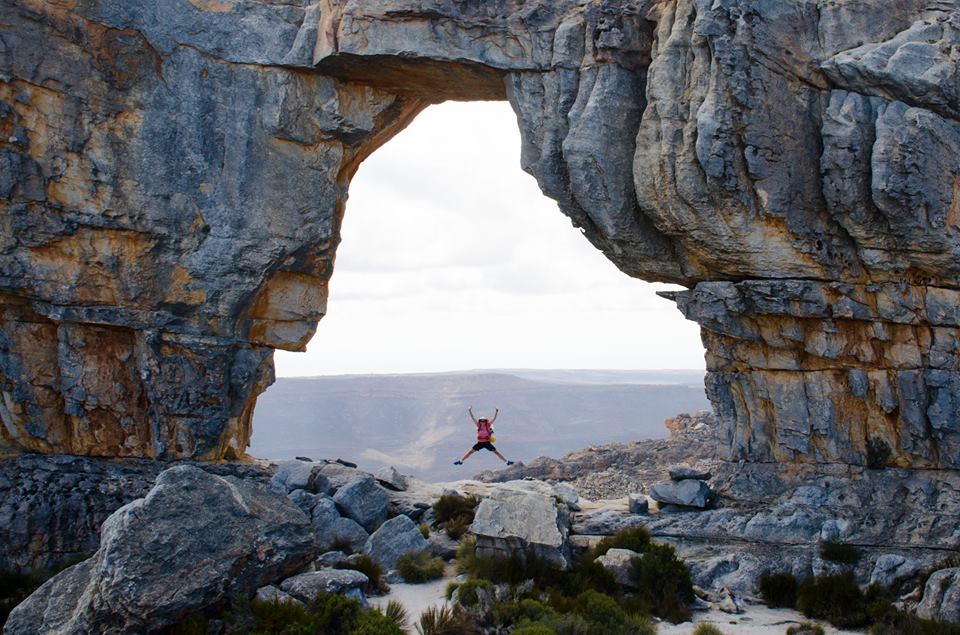 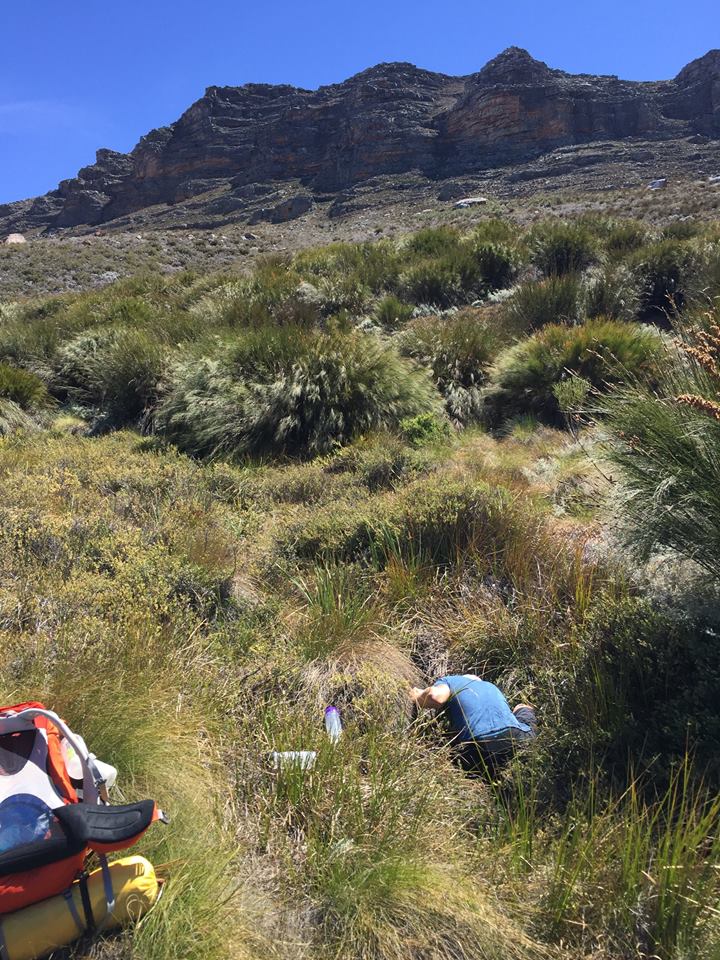 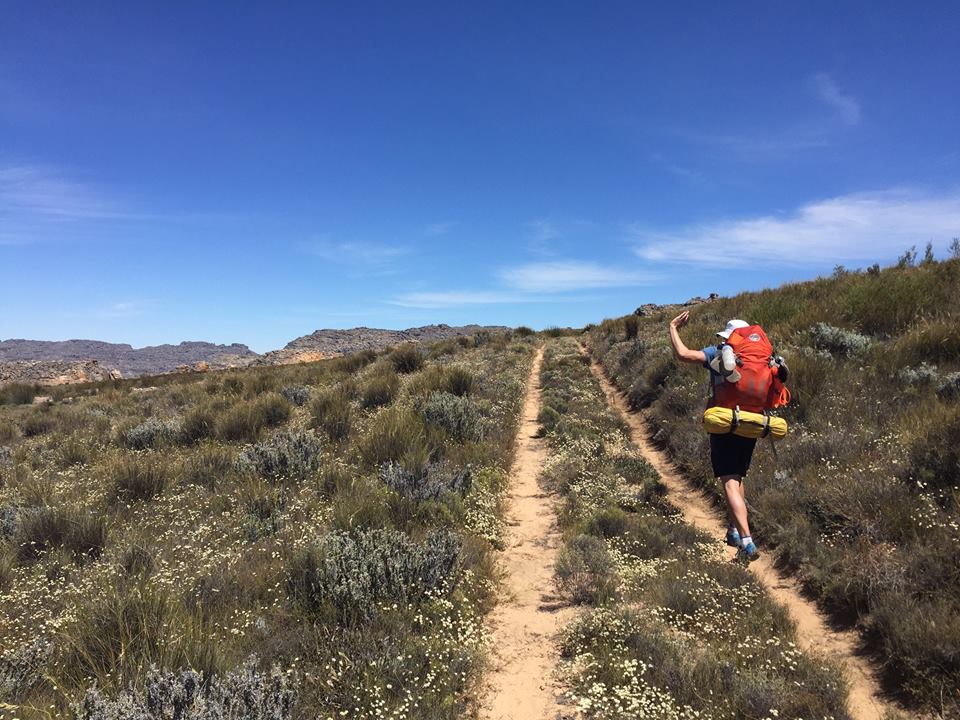 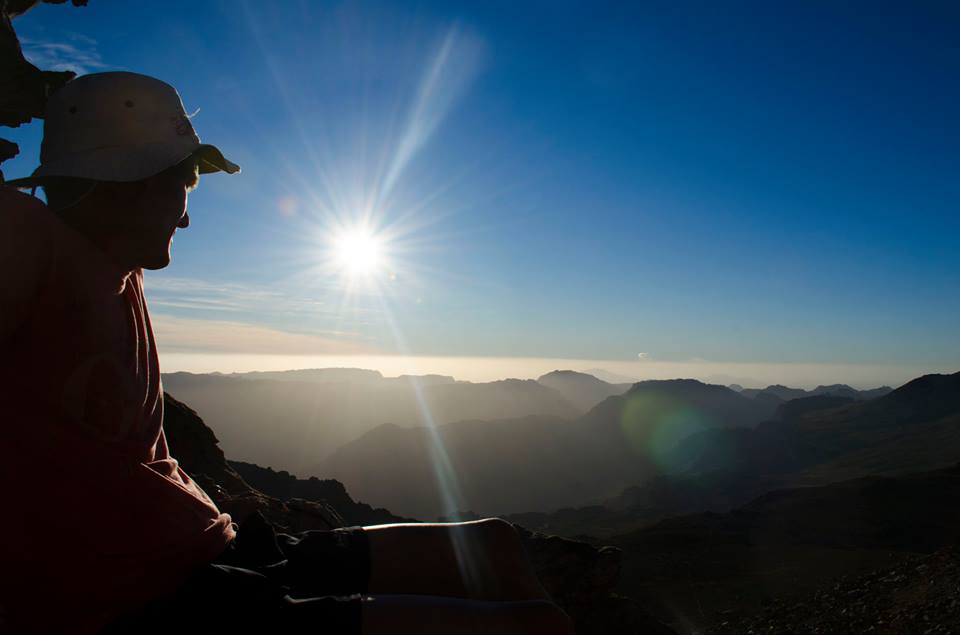 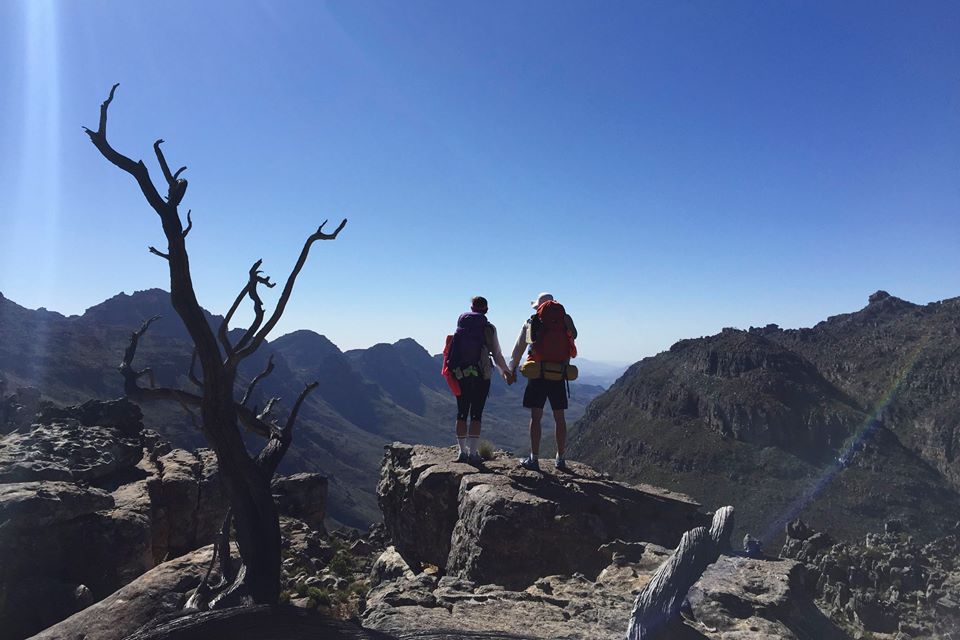 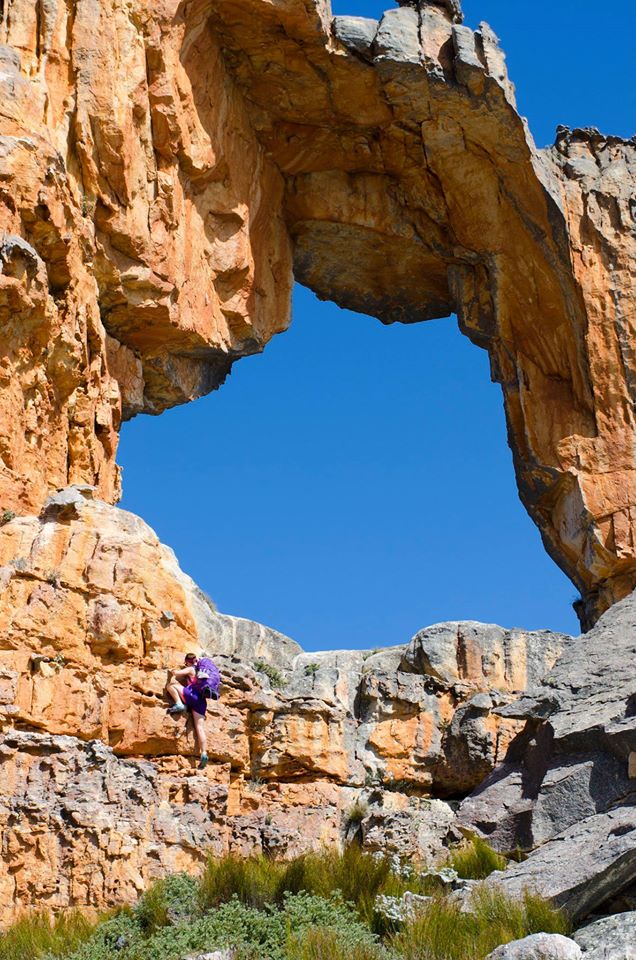 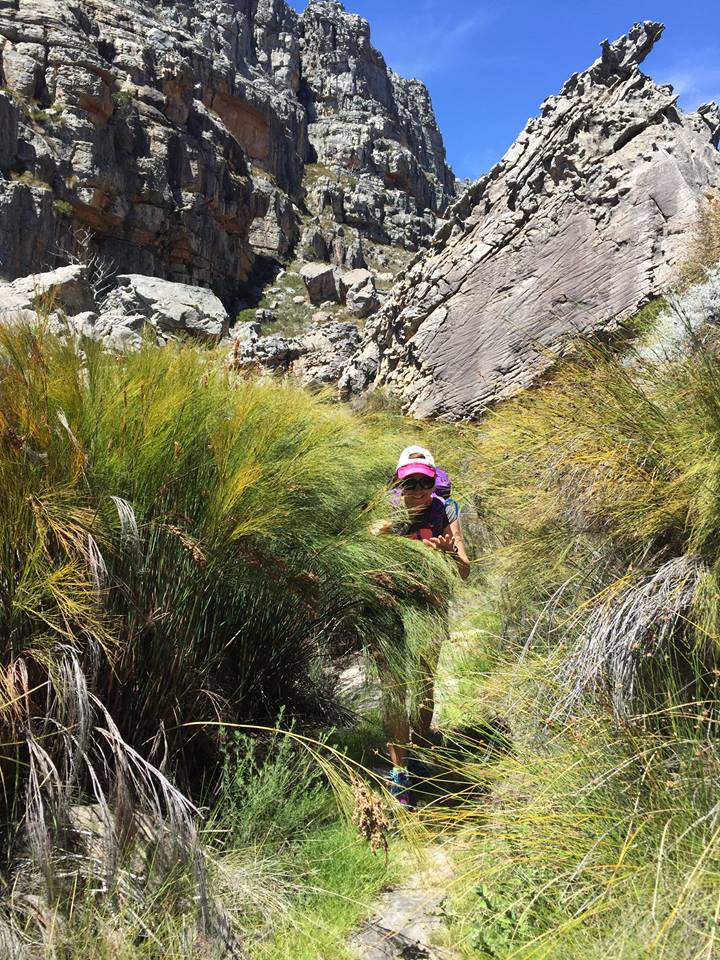 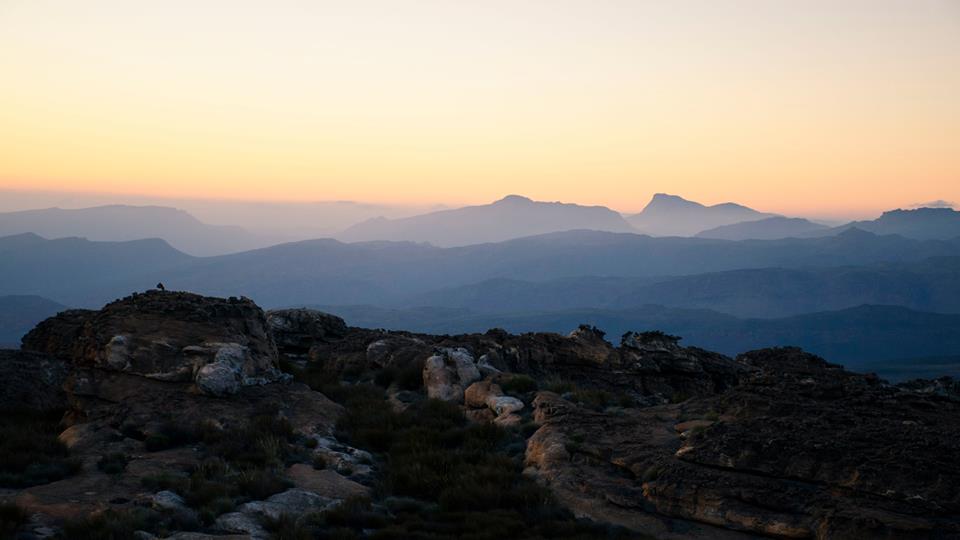 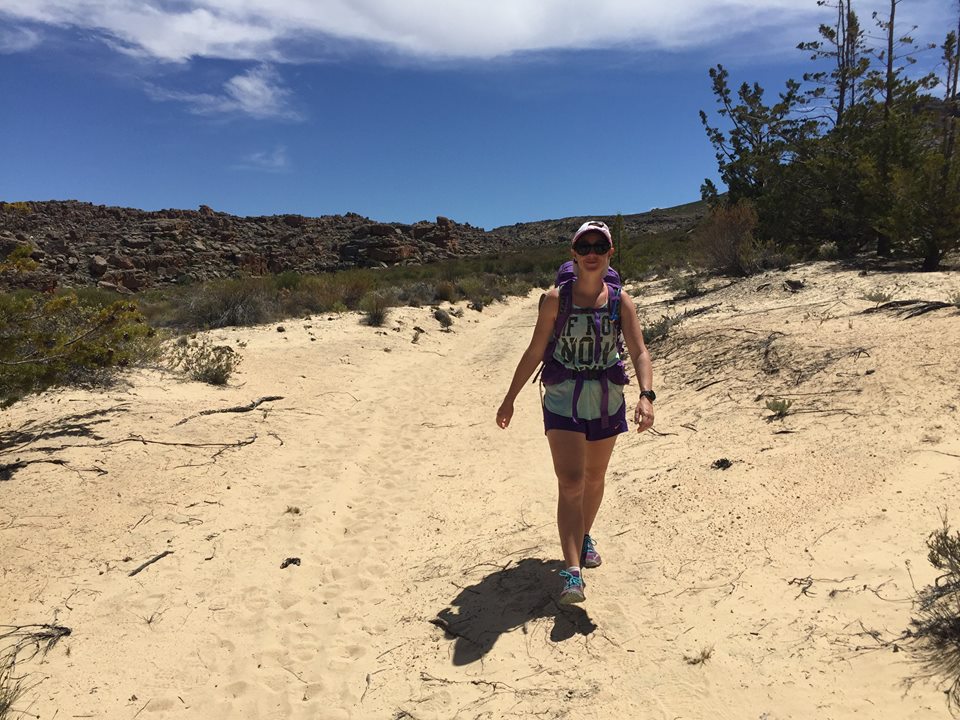