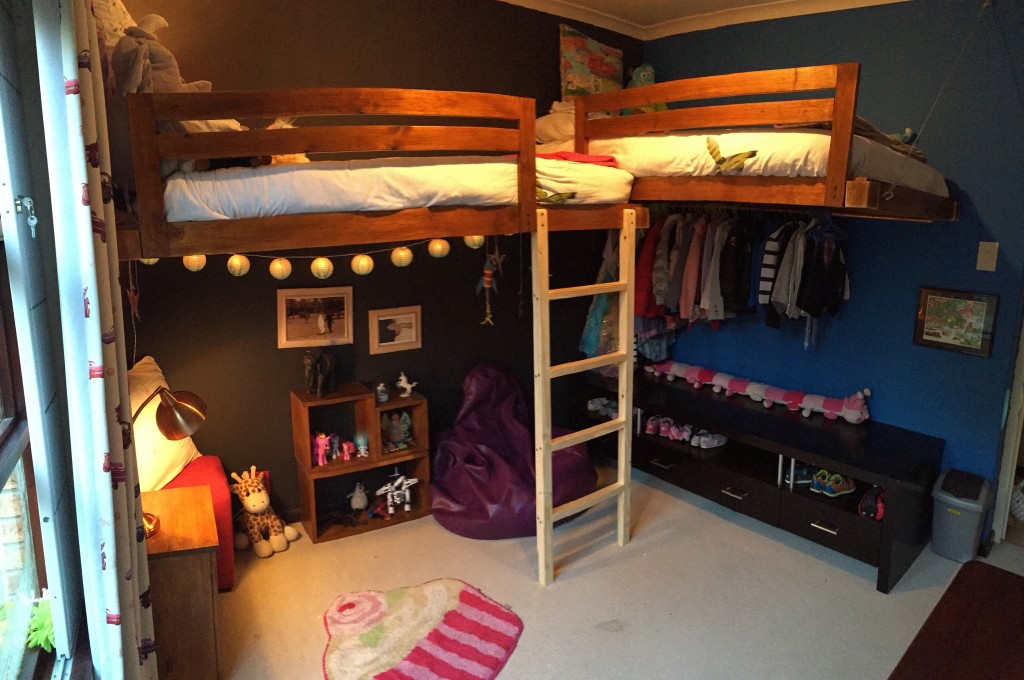 The end product - the new bedroom!

Now this is a rare treat, a blog post about the Wuth family at home. While my normal writing covers our adventures outside the home, I thought it about time I let you glimpse the chaos within our walls. Given that the weather has been somewhat frosty of late, we felt the time had come to undertake a project we have been putting off for quite some time… mounting beds to the wall in the kids room, so they could both be ‘on the top bunk’ as the request went.

When they came to us with this idea a few months ago, we immediately put it into the ‘never gonna happen’ box. After a little thought and a lot of research, I found a do-it-yourself guide to building and mounting beds at your chosen height. This meant we could provide them both with the optimal ‘top bunk’ position, without having to fit four beds into one room.

I subsequently spent the next two months perfecting my plan and deciding what we needed to make this work. I thought my plan was pretty solid. The fact that I have no idea about engineering or ‘weight bearing joints’ was irrelevant, I was going to figure it out as I went. If the beds were a little wobbly, well, the kids would just have to be more careful on them.
So the kids and I spent the last week of the holidays painting their new room. Lola wanted black, Lincoln wanted blue. We called a truce with one wall of each. We were ready for the hard labour to begin. 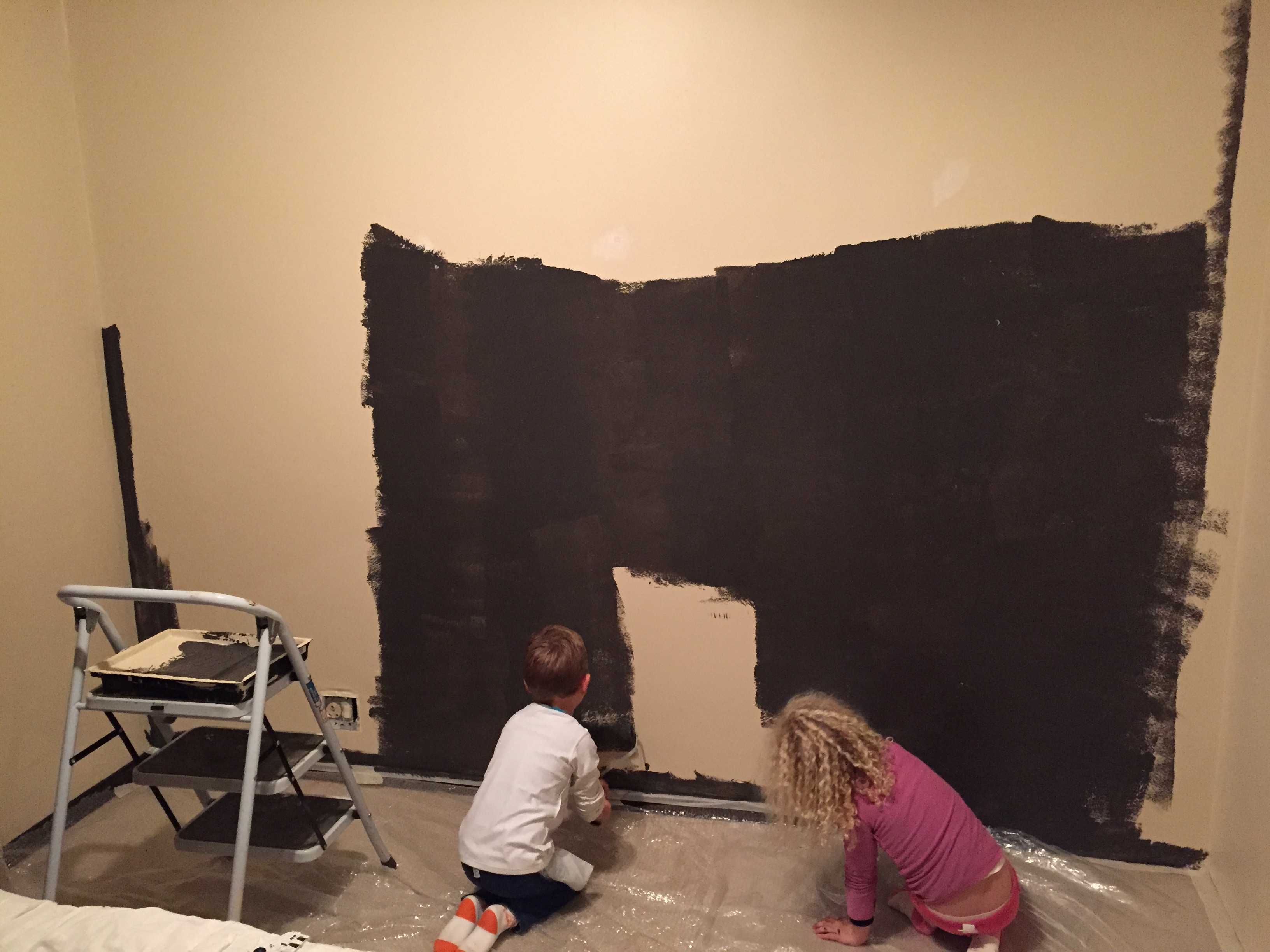 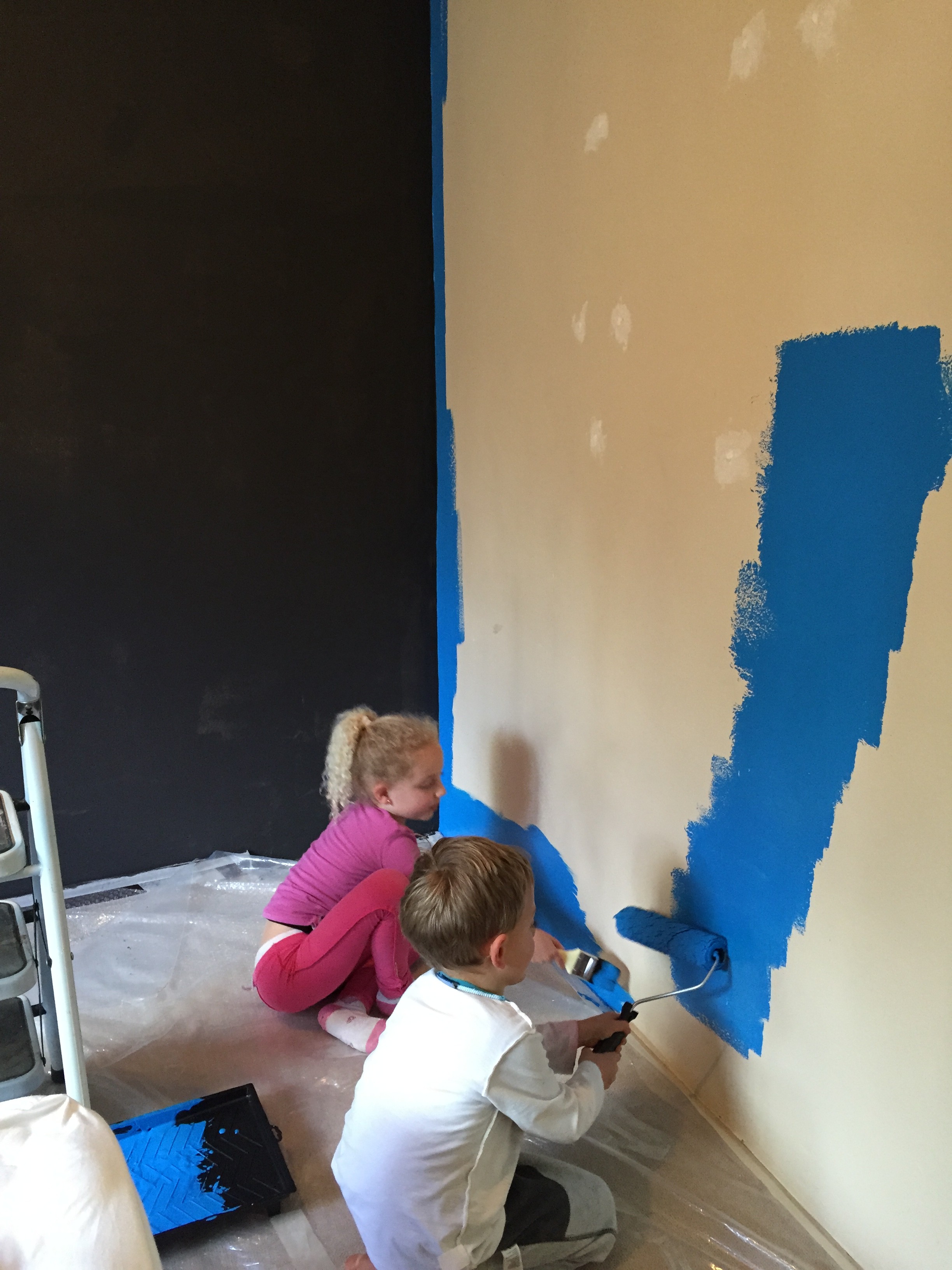 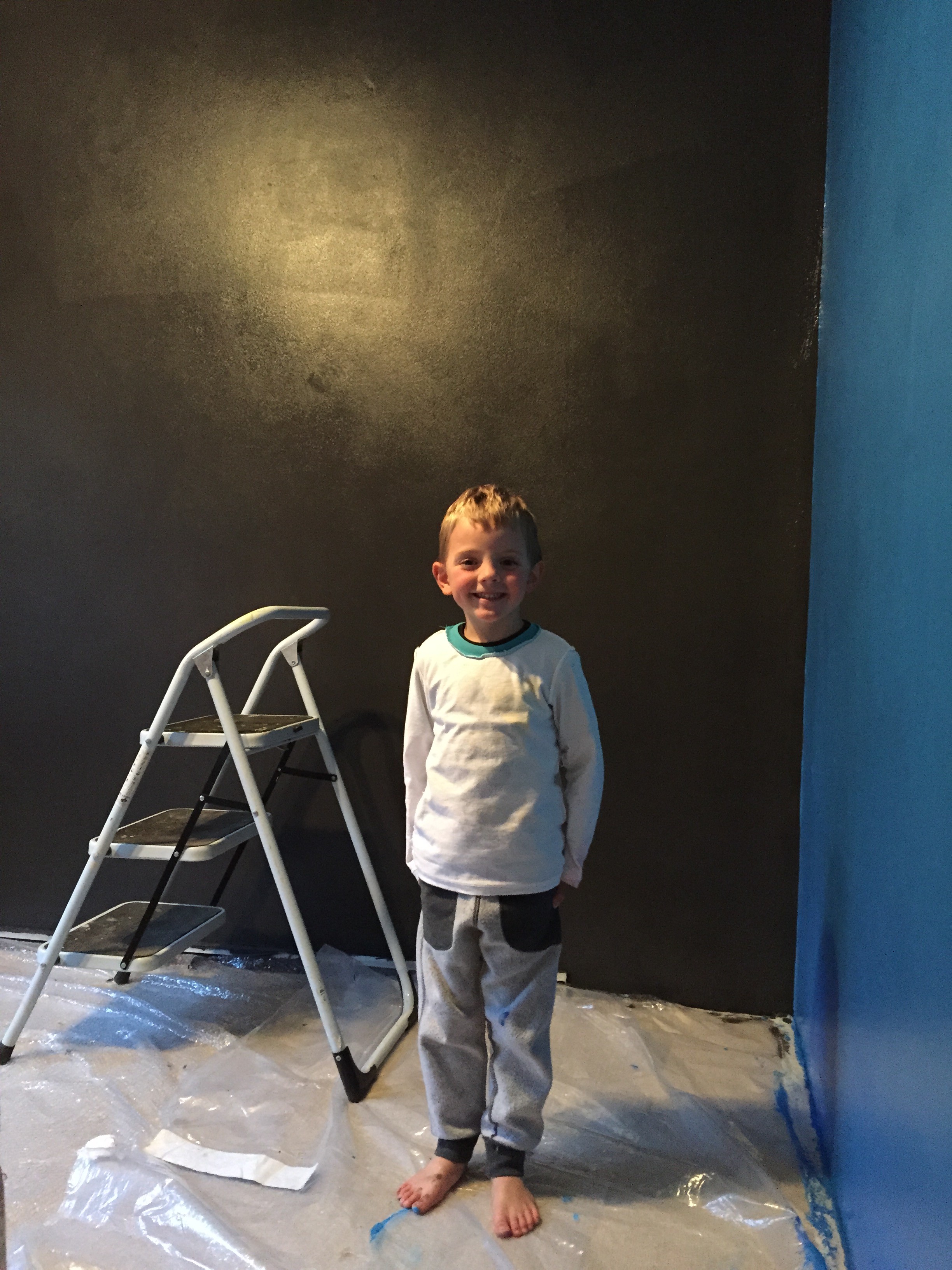 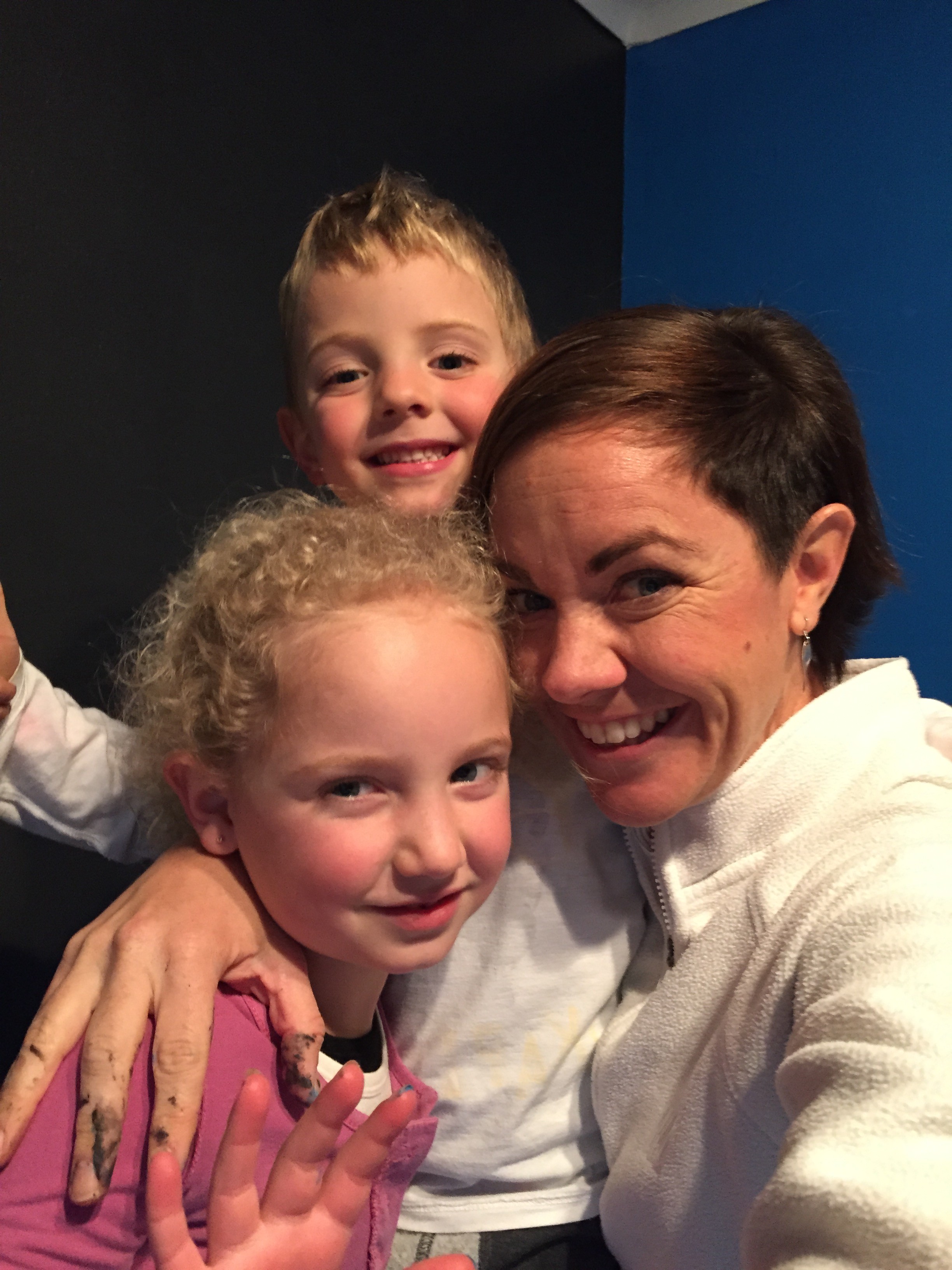 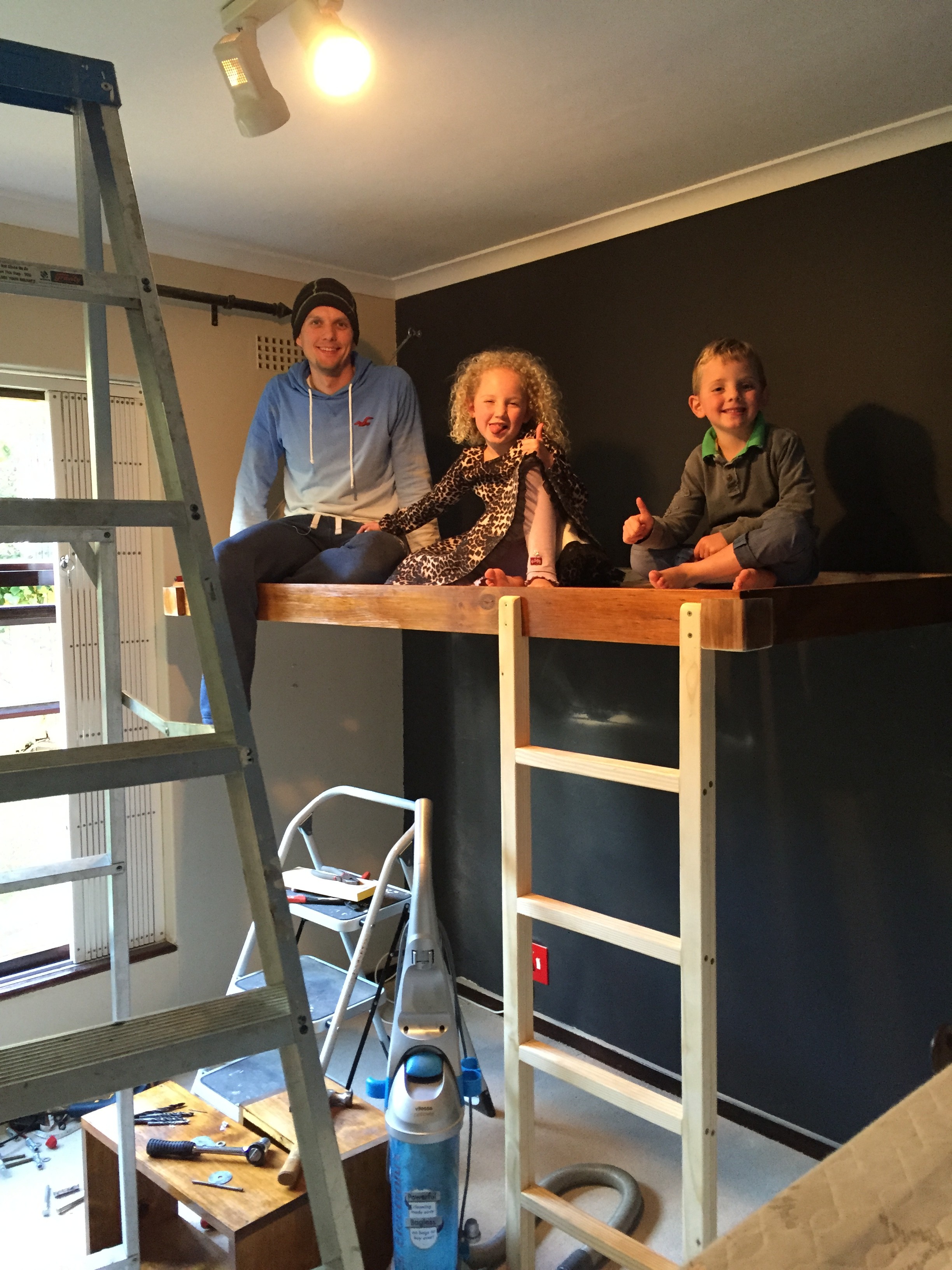 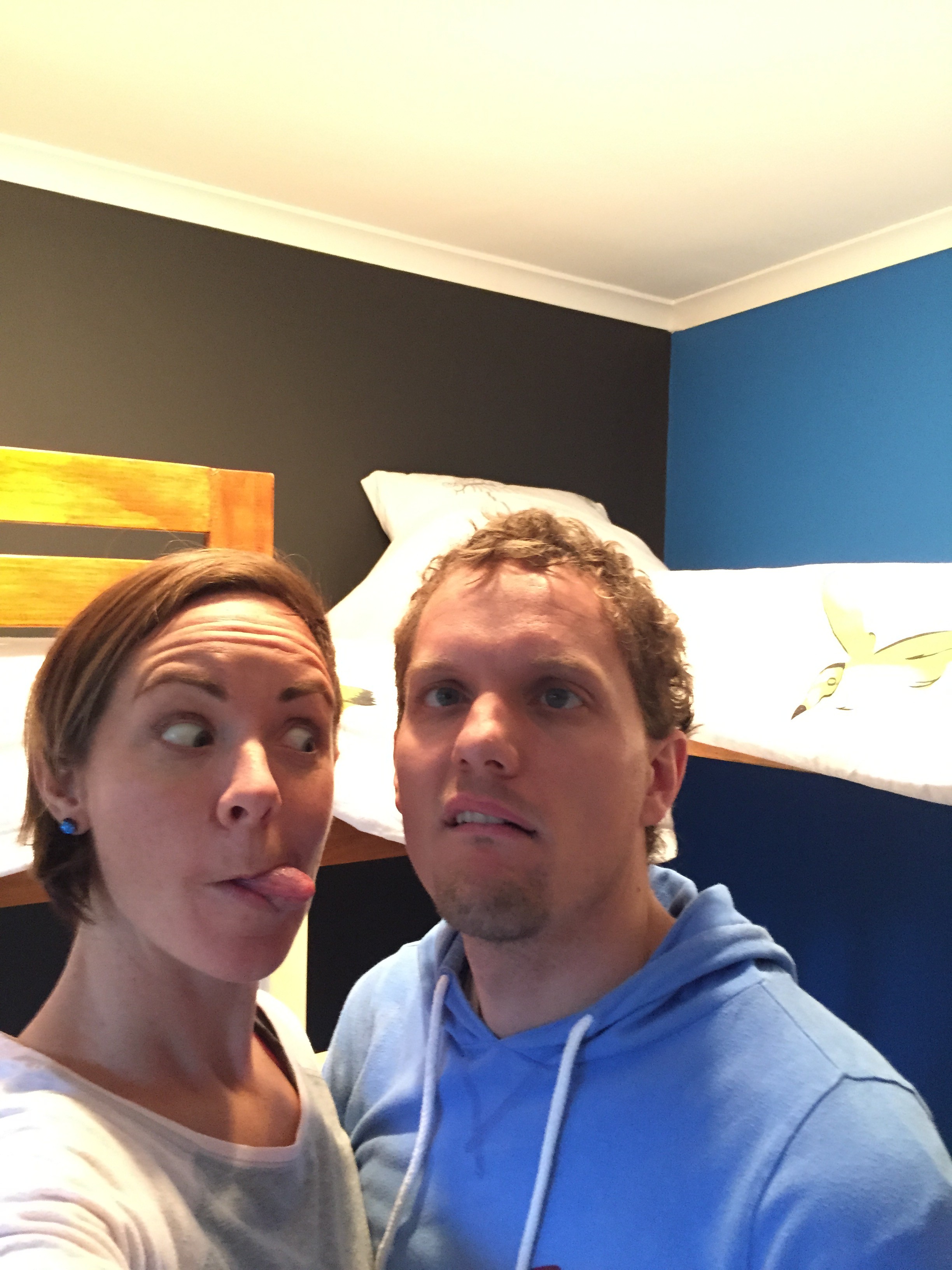 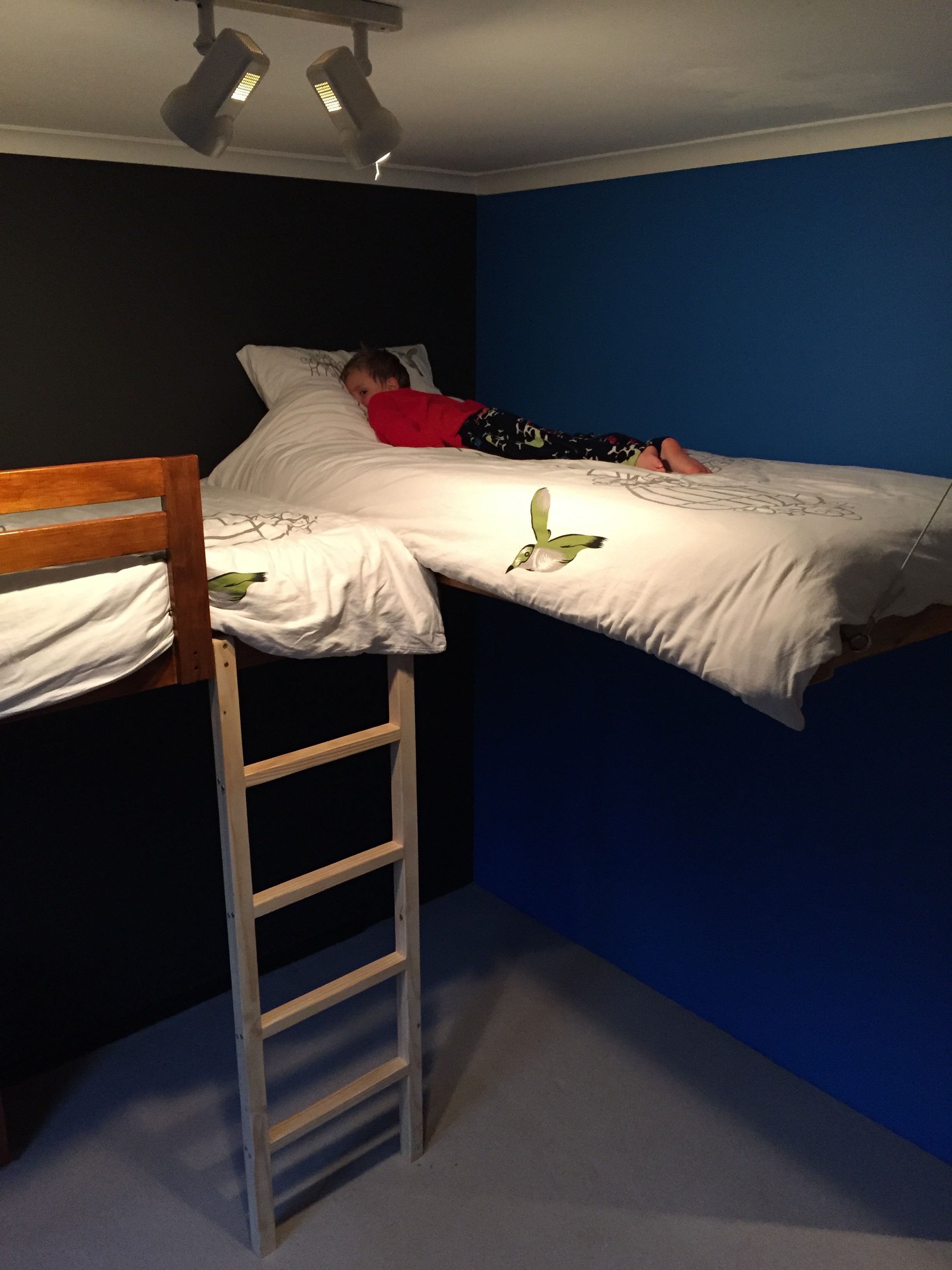 Now something I probably should have mentioned earlier is that Shaun is not a fan of DIY. In fact, he rather detests it. Things never go according to plan, it always takes about 5 times longer than you think, and the finished product is never perfect.
So, after convincing Shaun that this was something that had to happen sooner or later, I drafted the plans for him… he was less than pleased with my design…

Shaun: “What happens if 5 children are bouncing on the bed at the same time?”

Mary: “Well they can’t can they? They will bump their heads on the ceiling!”

Shaun: “What happens when we’re all up there together?”

Shaun: “What happens if the bed collapses with the children in it?”

Mary: “Well then they’ll land on the mattress and it’ll be a soft fall.”

This carried on for a while. Nowhere in our marriage preparation classes did they cover DIY conflict. This should be rectified.

So, we (Shaun) spent the whole of Saturday morning redesigning my structural work, while I watched 2 months of fruitless preparation disintegrate in front of my eyes. We then spent the whole of Saturday afternoon at the hardware store, followed directly by the toy store where we had to pick up Lincolns birthday present for the next day. These shops are not places you should take your children to!
They literally pretended to be dogs at the hardware store, hiding in the kennels and crawling around on the floor. Have you ever seen the state of a hardware store’s floor at the end of a day? You should have an idea of condition they were in when we got home then.

We began our ‘Saturday morning’ project at 4 o’clock that afternoon. Anything tip you off that we were off to a bad start? By the kids bed time, 7pm, we had built the ladder and measured where the beds were going to go. If nothing else, Shaun and I have stubbornness in common. This meant the kids where going to listen to our drilling long into the night, so long in fact, that they were begging us to go to bed.

By 10 o’clock, we had one wall bolt in the corner of one bed and realised we had drilled the wrong size holes for all the others. We checked out for the night before one of us filed for divorce papers. As it turns out, Shaun and I aren’t that good at DIY’ing together. We don’t see eye to eye, particularly when things start going wrong.

Sunday was a new day; we would tackle the problems when we were fresh. The fact that it was Lincoln’s birthday would just mean that the beds would be a birthday present. The 2 social engagements we had planned for the day would have to be shuffled around. Totally do-able.

After a rocky start with a few ‘poorly drilled’ holes, prematurely dried cement and scraping my fresh paint off the wall, we got the job done at 6 o’clock that evening. Leaving enough time to take Lincoln out for his birthday dinner. 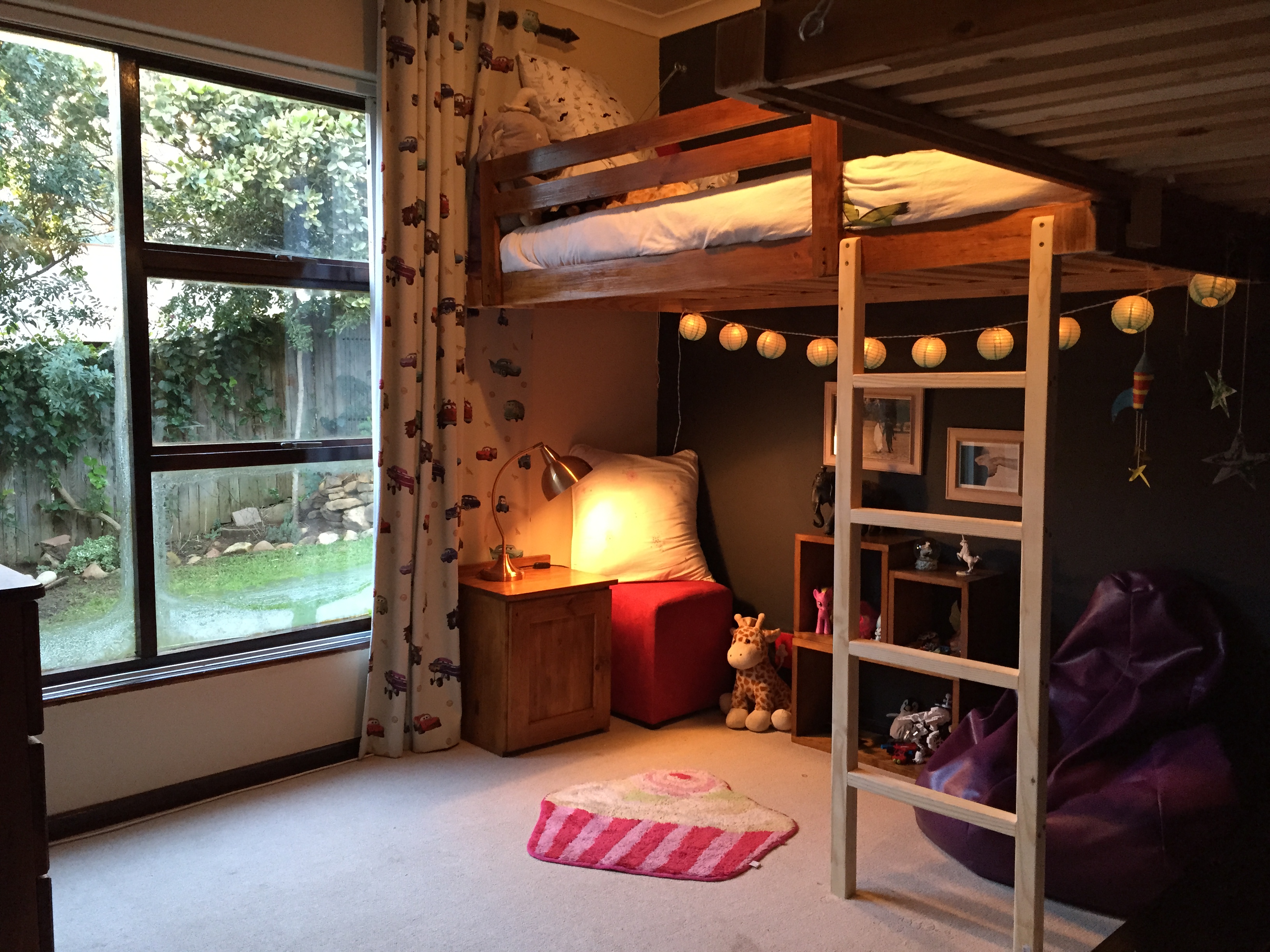 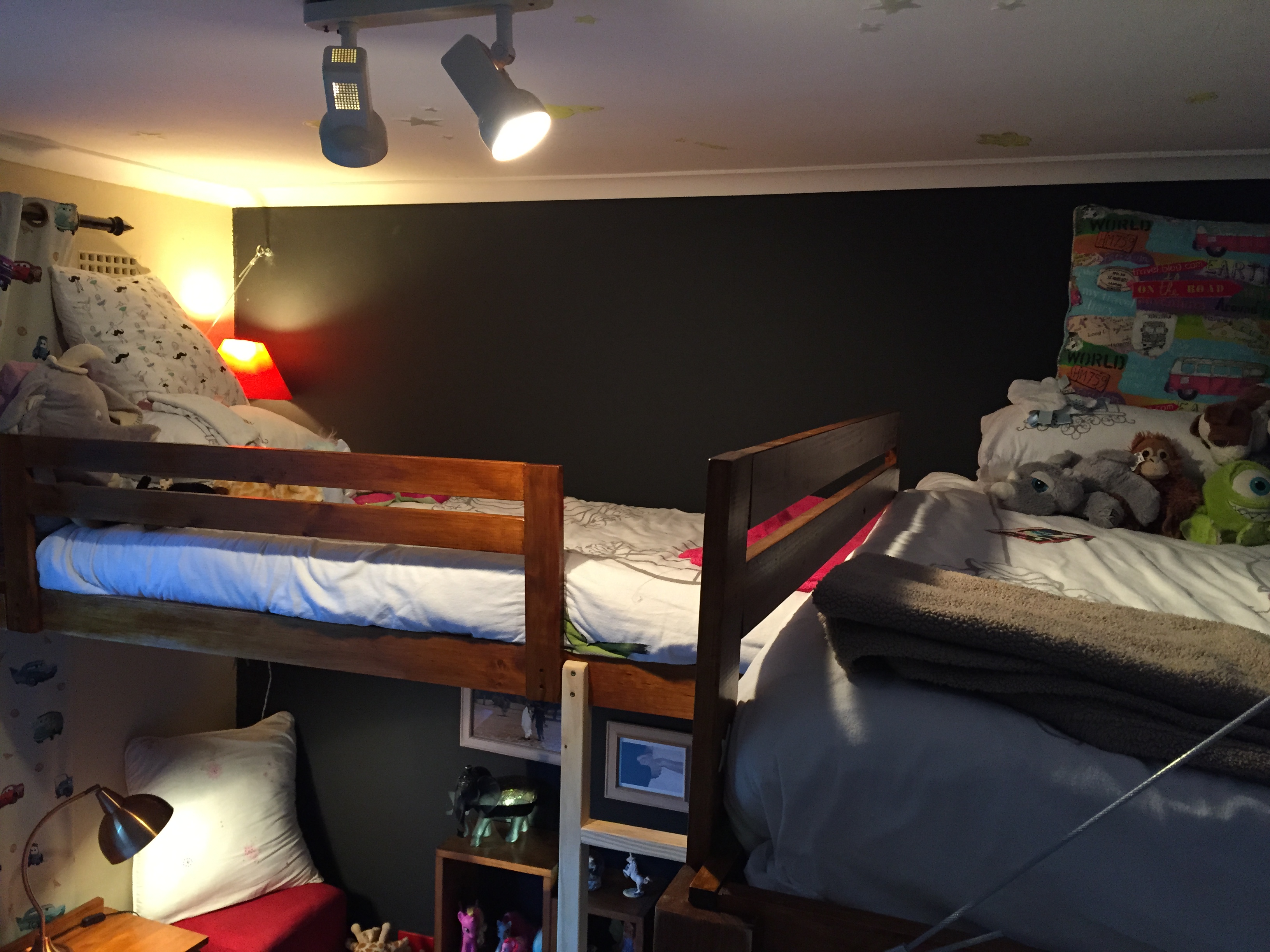 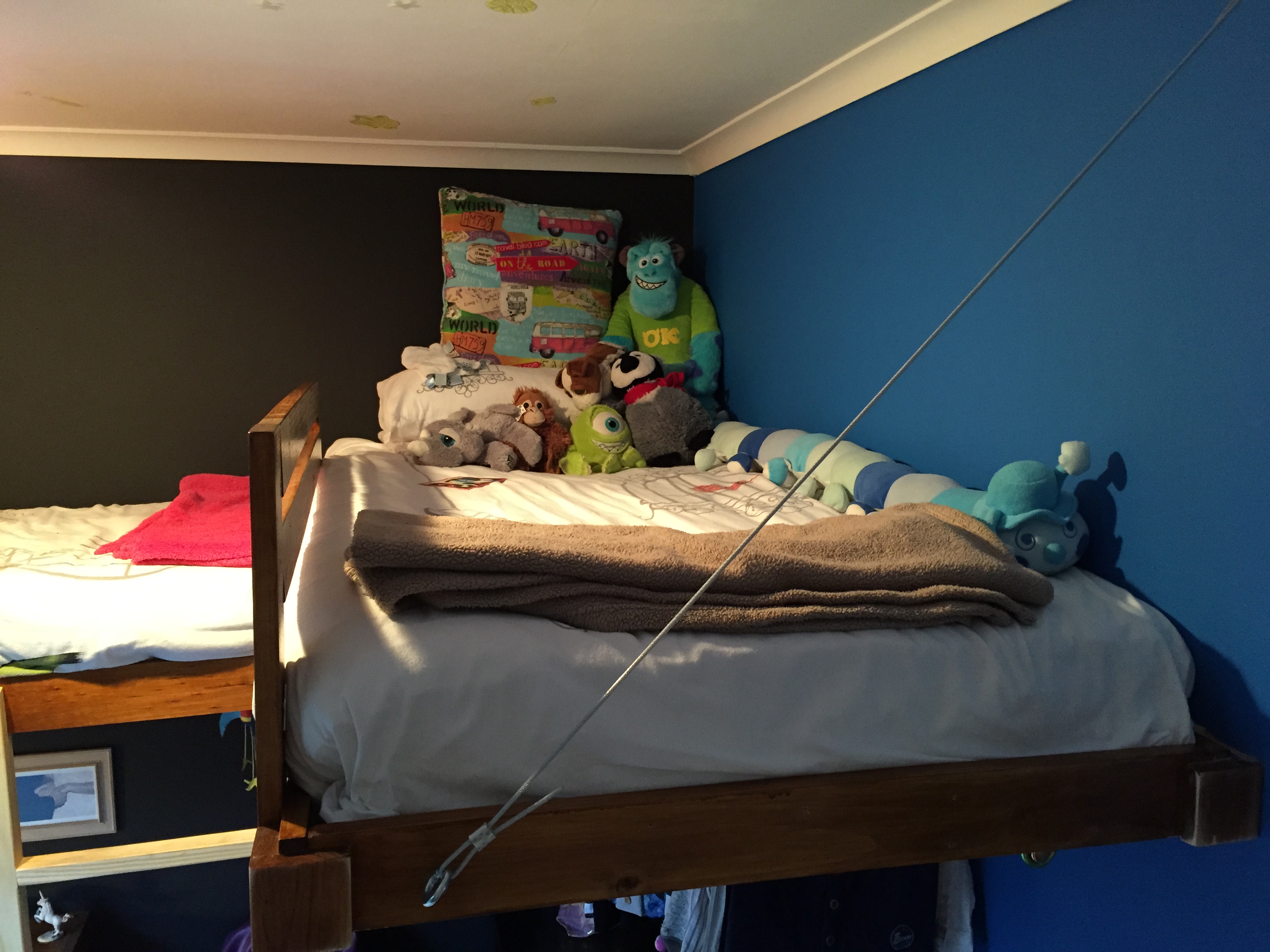 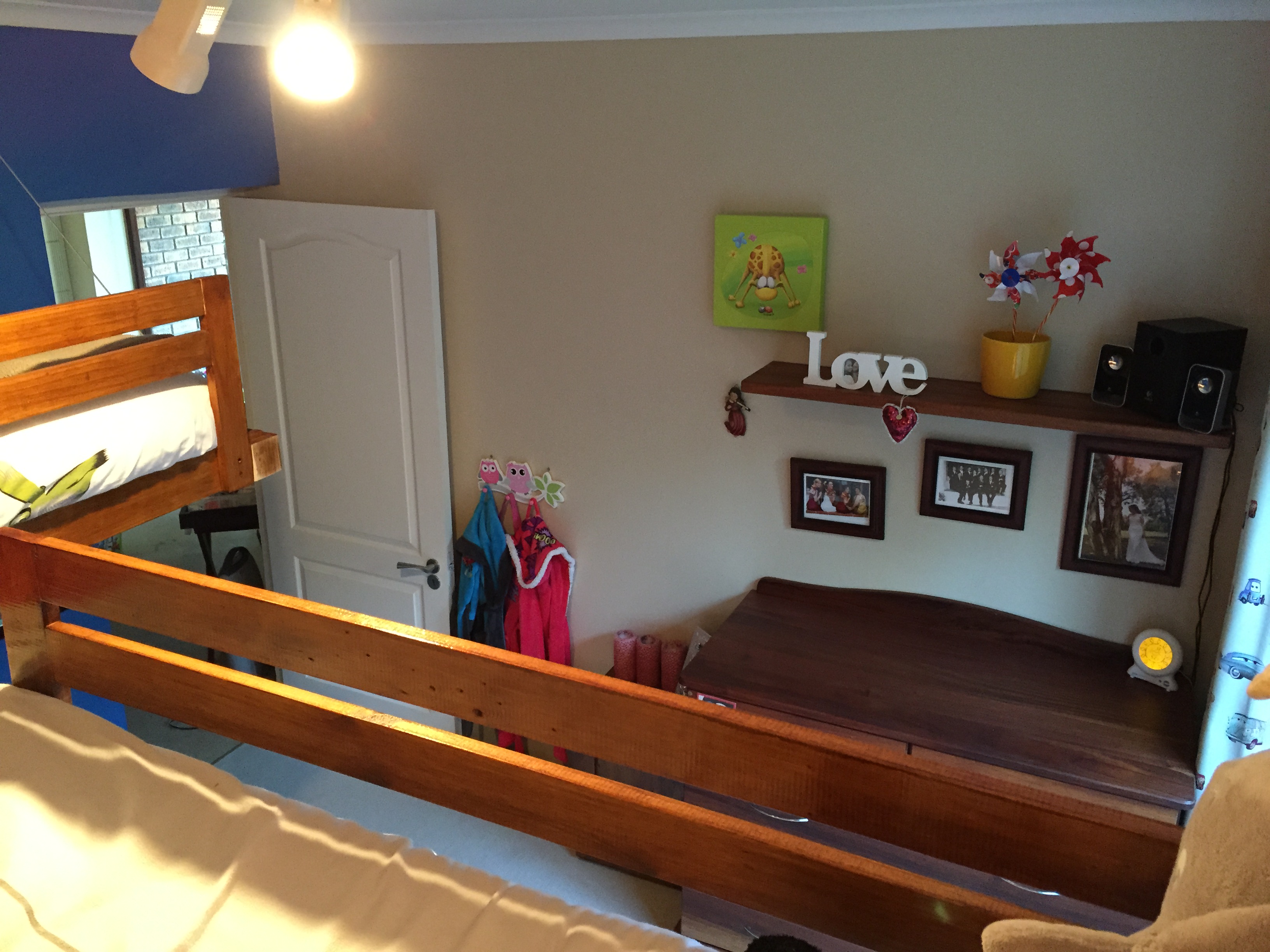 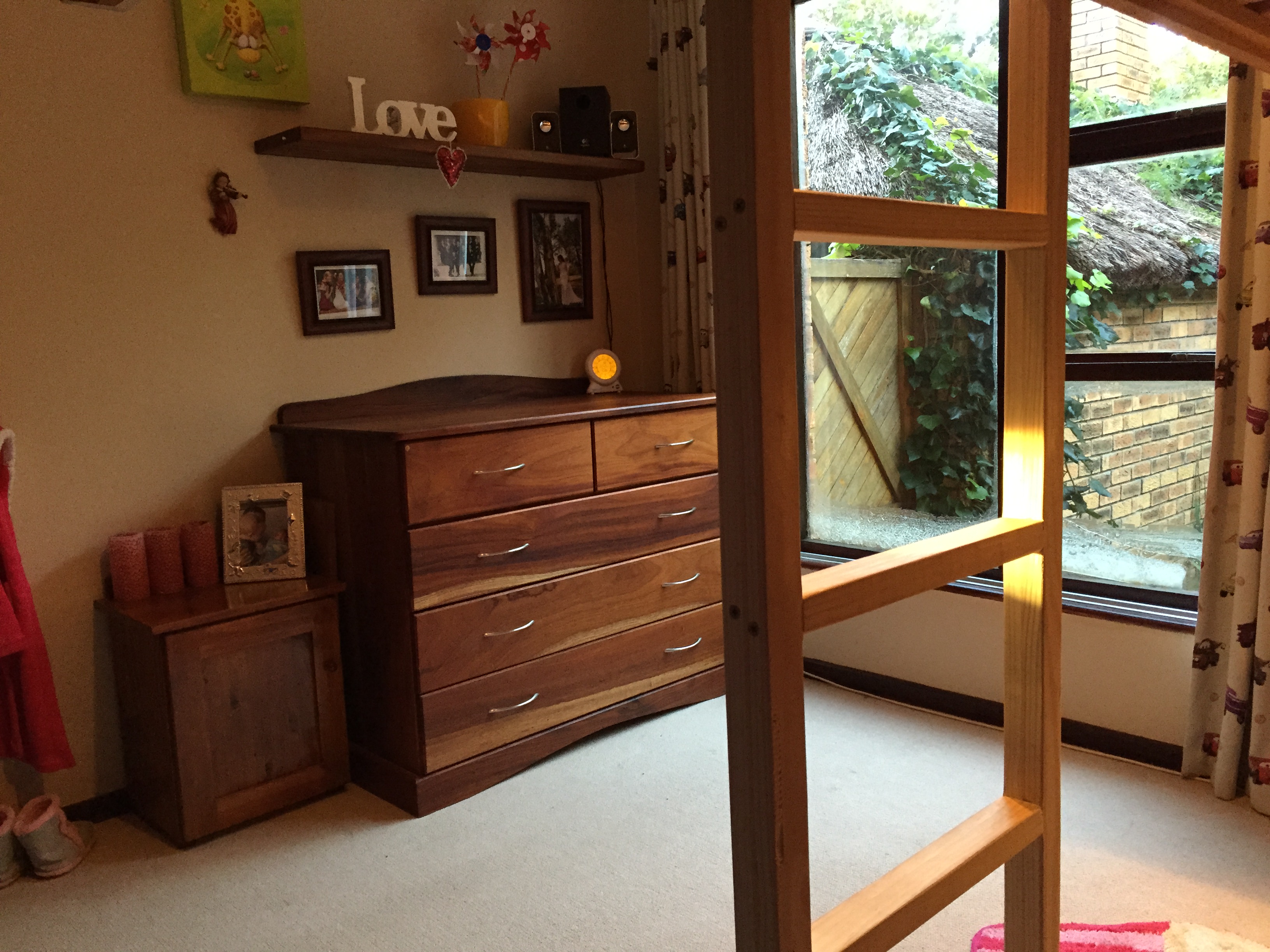 They did get to sleep in their new beds that night and the joy of it almost made the effort worthwhile. I know as the hard work fades to a distant memory it will look like a terribly sensible project. It is certainly flavour of the moment and all current play dates happen on the top of the bunk beds, yes, five bouncing children. Maybe Shaun was right all along, but that’s not something I’m going to admit in a hurry.